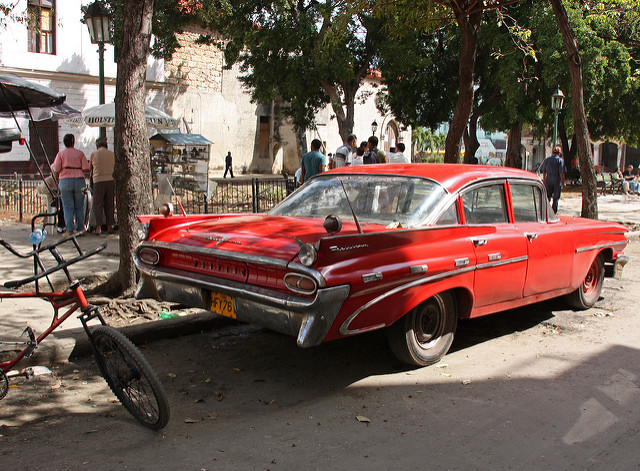 *Isn’t this what we come against, tourists who want to see their narrative of who we are? They’re not invested in our community, know little about us, and choose to see only what they want. Gaining control of the narrative is the first step in moving forward. There is a connection, between Cubans wanting to move forward and the tourist’s idea that wants Cuba to remain the same, and U.S. Latinos wanting to break free of old stereotype-stories, told many times by people who tell us they have our own best interest at heart. Cuba is changing, and so os the U.S.  VL

President Obama’s trip to Cuba later this week, the first by a sitting U.S. president in 88 years, marks a new chapter in U.S.-Cuba relations. This event, in conjunction with the recent announcement that commercial flights to the island will begin this year, has generated a surge of interest in travel to the island among Americans. Much of the excitement around traveling to Cuba can be best captured in a phrase I have been hearing with increasing regularity since relations began to warm: “I want to see Cuba before it changes.”

What “changes,” exactly, do people want to avoid seeing when they visit Cuba? The arrival of U.S.-style capitalism? A post-Castro political era? Whatever those changes travelers wish to avoid may be, they stand in stark contrast with the will of the Cuban people, who are very much invested in any change that would bring a brighter future to the island.

Cuba has long served as a canvas for the projection of American fantasies. This reality has resulted in a lack of appreciation for the complexities of life on the ground for most Cubans and the role of the United States in producing them.

Albert Laguna is an assistant professor in American studies at Yale University.

En otra voz is the first Spanish-language anthology to bring together literature from the entire history of Hispanic writing in the United States, from the age of exploration to the present. The product of hundreds of scholars working with the Recovering the U.S. Hispanic Literary Heritage program over ten years, the anthology has compiled for the first time scores of previously unknown works in the Spanish language written by Hispanics of diverse ethnic backgrounds and classes. It is the most comprehensive literary collection available in Spanish, spanning more than three centuries and including a broad range of genres.

Organized chronologically into three sections which represent the three major manifestations of Hispanic culture in the United States—Native, Exile and Immigration—the anthology goes beyond the written tradition to also include oral literature: folk songs, tales, personal experience narratives and even rhymes.