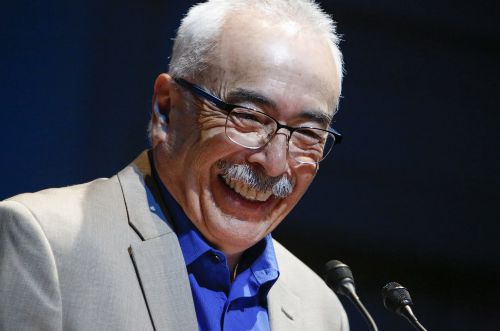 *A wonderful article about the U.S.’s first Latino Poet Laureate! He did his inaugural reading Tuesday in Washington DC. VL

Juan Felipe Herrera, the new U.S. poet laureate, thanked a lot of people during his inaugural reading Tuesday night. But then he took the audience back to 1958 and described a woman in Burbank, Calif., who put him on the path to Washington.

[pullquote]Herrera, the first Mexican American U.S. poet laureate, made it clear Tuesday night that he’s bringing a new sense of wonder and drama to the position.[/pullquote]

Herrera, a child of migrant farmers, had been punished in first grade for speaking Spanish; second grade, he sighed, was another “brutal year.” But in third grade, he had Mrs. Sampson. One day, she asked him to come to the front of the class and sing a song. Nervous and self-conscious, he sang “Three Blind Mice.” His friends had to translate Mrs. Sampson’s assessment into Spanish for him: “You have a beautiful voice.”

“It changed my life,” Herrera told the rapt audience at the Library of Congress. He has spent years trying to realize what Mrs. Sampson meant, and now he tells others, “You have a beautiful voice.”

[Photo by Shawn Miller/Library of Congress]