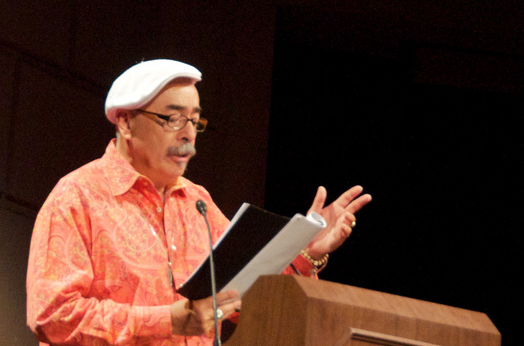 *The Poet Laureate position is ceremonial, but it comes with the perk of the Library of Congress pulpit. Herrera says he’ll use it to encourage others to speak up and speak out. VL

As a child, Juan Felipe Herrera learned to love poetry by singing about the Mexican Revolution with his mother, a migrant farmworker in California. Inspired by her spirit, he has spent his life crossing borders, erasing boundaries and expanding the American chorus.

[pullquote]“Juan Felipe is someone who believes that poetry can make a difference in people’s lives and communities.” -Jennifer Benka, executive director of the Academy of American Poets[/pullquote]

On Wednesday, [tweet_dis]Herrera becomes the first Hispanic American to serve as poet laureate of the United States.[/tweet_dis]

“I’m looking forward to a whole new world — and a new me,” Herrera said from his home in Fresno, Calif. “The times now seem to be evolving with voices of color. All voices are important, and yet it seems that people of color have a lot to say, particularly if you look through the poetry of young people — a lot of questions and a lot of concerns about immigration and security issues, you name it, big questions. All this is swirling in the air.”