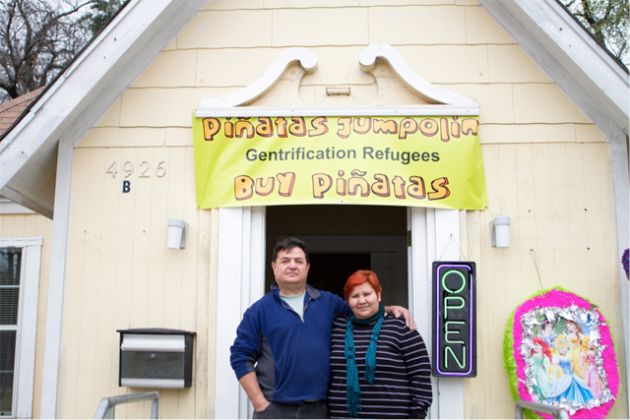 *So much about Austin, gentrification and the unprecedented growth of SXSW in this piece. Everything about Austin and Southby had a patina of cool, but locals, especially Latino Austinites, knew that beneath the thin veneer there was another Austin that wasn’t so cool. The festival will still get the lion’s share of positive press becasue there are good things about it. But this story is also part of the narrative. VL

The morning of February 12, 2015, Austinite Sergio Lejarazu was driving past his small business, a piñata and bouncy house store called Jumpolin at 1401 E. Cesar Chavez Street, on his way to drop his daughter off at school. That’s when he noticed something strange. Jumpolin wasn’t there anymore. He pulled over and quickly learned that his new landlords, Jordan French and Darius Fisher, two 2007 Vanderbilt University gradsoperating as F&F Real Estate Ventures, had demolished the building that Jumpolin occupied for eight years. The building still had all the inventory, cash registers and some personal property inside. Sergio and his wife Monica say they were given no prior warning and were up-to-date on their rent with a lease good until 2017.

Turns out, F&F were in such a hurry to demolish the building, because they had rented out an adjacent building that shared a lot with Jumpolin for a tech entrepreneur party scheduled to coincide with SXSW on the night of March 14. But F&F couldn’t get a variance from the city allowing them to skip the parking for their guests, so F&F’s agentACI Design Build Contractors withdrew the request for a variance and applied, instead, for a permit to demolish the building in which Jumpolin was housed. I guess that’s one way to make room for a parking lot. No one from the city verified the building was vacant because, apparently, that’s not part of the protocol.

“Making sure if someone is living in a building or has property stored in the building seems to me much more between the owner of the building and the tenant,” City of Austin Historic Preservation Officer Steve Sadowsky told the Austin Chronicle. “And that’s not the city’s concern.”