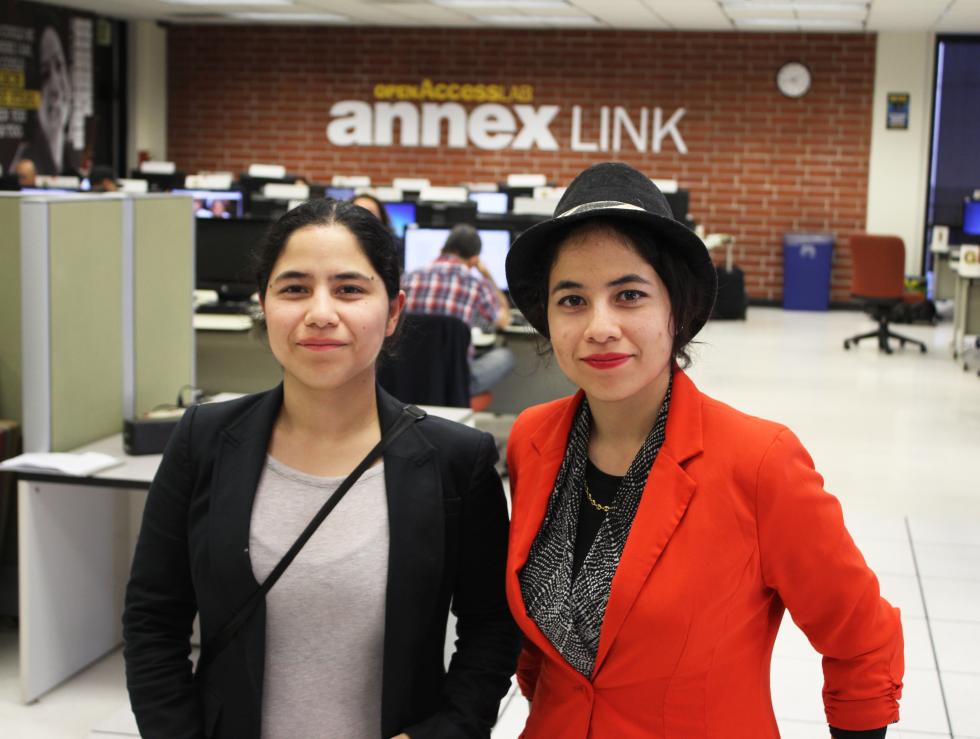 *No que No??!!! The twin sisters created a camera with face tracking technology to be worn by cops in the field. They got to work on it after the events in Ferguson. They want to “bring transparency to law enforcement.” Es todo. VL

Los Angeles–Cal State L.A. computer science major Penelope Lopez and her twin sister America do just about everything together, including developing award-winning technology.

The 24-year-old twins took the top prize in the Women in Tech Challenge at the 2015 AT&T Developer Summit and Hackathon held in January in Las Vegas.

Their winning project was the “Body Camera Hack,” a prototype camera with face-tracking technology that can be worn by law enforcement officers to record their actions in the field. The camera was inspired by the fatal police shooting of Michael Brown in Ferguson, MO, and the conflicting testimony following the incident.

The device is also useful for journalists and researchers recording weather events such as storms and tornadoes, said America Lopez, who attends Los Angeles City College. She and her sister are refining the design to make the camera lighter and less bulky.

The 24-hour hackathon, held in conjunction with the huge International Consumer Electronics Show 2015, was a nonstop test of skill and stamina. Hundreds of developers, many of them tech industry veterans, attended workshops run by experts and were provided the latest software, APIs and hardware. The participants raced to build apps or wearable technology, such as smart watches and smart goggles.

Exhausted from an all-night bus ride from Los Angeles to Las Vegas, the twins went to several workshops and assembled their camera.

“We were wiped out, but we pushed each other,” America said.

With their win, the twins attracted the attention of tech industry leaders and were invited to the prestigious Women’s Startup Lab in Silicon Valley. The two-week accelerator lab is limited to 20 women from across the country. Cutting-edge developers, investors and tech-firm executives will also participate in the lab, which runs from February 23 to March 8.

Penelope and America were awarded a scholarship that pays for half the cost of attending. They’ve created a crowdfunding page to help raise an additional $5,000.

The twins, who tool around Los Angeles on their Honda motorcycle, are a diminutive, but dynamic duo who push each other to develop new and better apps. They’ve built apps featuring math quizzes and study guides to help motorcyclists take their driving permits. One of their favorite designs is a Harry Potter trivia app. The daughters of Mexican immigrants, the twins were raised in the hardscrabble Ramona Gardens Housing Project and graduated from Abraham Lincoln High School in the Lincoln Heights neighborhood of Los Angeles.

Like many Cal State L.A. students, they possess a strong commitment to community engagement and public service. Both were elected last year to the Lincoln Heights Neighborhood Council. Both see themselves as role models and want to inform other Latinos of the opportunities in technology fields.

The sisters plan to build a website in Spanish and English that includes video tutorials on how to develop apps and wearable technology.

Penelope’s interest in programming and app development was sparked by a robotics class she took in the College of Engineering, Computer Science, and Technology, and the help she has received from Cal State L.A. Professor Claudia Espinosa, who has served as a mentor for the young developer. “She’s been very supportive,” Penelope said.

Now fully committed to pursuing a tech career, she and her sister are regulars at the university’s 24-hour Access Lab.

“You have to push yourself,” Penelope said. “You have to take advantage of what the school has to offer.”

Photos: At the top from left to right, Penelope Lopez and her twin sister America in the Cal State L.A. 24-hour Access Lab. In the lower photo, the twins display their winning “Body Camera Hack” project. (Photos: Cal State L.A.)