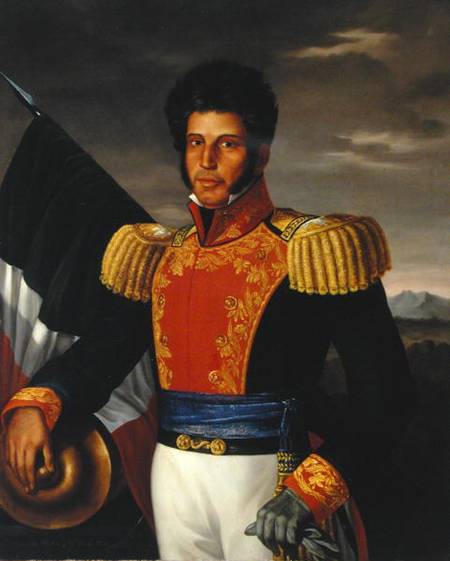 *Interesting things to note here: I spent part of my elementary and all of middle school (secundaria) in Mexico. I studied Vicente Guerrero in my history classes, using the same standard history book used by all school children in the country. I don’t recall reading or being told about Guerrero’s Afro heritage. Not that it isn’t true, just that even today, in many versions of his biography, his family is referred to as mestizo. Yet today it’s also a widely acknowledged fact that the second President of Mexico had African ancestry. Depending on where you read, either his mother – Maria Guadalupe Saldaña – was a slave, or his grandfather was. The word mulato comes up every now and again in biographies. It’s timely because of an anniversary. President Guerrero abolished slavery in Mexico on February 14th, 1829. Also interesting is that Guerrero’s birthplace, Tixtla, is a mere 76 miles from Iguala, where the 43 protesting students recently went missing. Of course there isn’t a direct connection, I just think it’s interesting. VL

Only a few of us Chicanos have read or heard of Vicente Guerrero, Mexico’s second president. He’s best remembered by our neighboring country’s school children for his words during those revolutionary times,”Mi patria es primero.” “My motherland comes first.”

Since the election of Barack Obama as U.S. President four years ago and his re-election in November, Guerrero is gaining extra recognition in Mexico and the United States as well, on two counts.

Mexico abolished slavery a third of a century before the U.S.

First, he, not Obama, is the first man of African heritage to be elected president of a North American country. Historians write that Guerrero’s paternal grandfather was either a slave himself or descended from African slaves. Second, Guerrero abolished slavery in Mexico in 1829, a third of a century before the United States fought its bloody Civil War and the U.S. Congress passed the 13th Amendment to our Constitution.

Guerrero, the son of African-Mexican Pedro Guerrero, was assassinated two years after taking office. His mother Guadalupe was born to indigenous Mexican parents. Herman Bennett shares their story in his book “Africans in Colonial Mexico”. The first African slaves were brought to the New World before the Mayflower showed up in 1620. By the early 1600s the number of Africans dropped off at Mexican ports “collectively rivaled, if not outnumbered, Spaniards throughout New Spain,” writes Bennett. “At Veracruz, persons of African descent constituted 63 percent of the non-indigenous population.”

As African Americans pay tribute to their forebears this month, we should examine our southern neighbor for the prominent role Africans played there. Their contributions have been flimsily acknowledged and grossly under-appreciated in Mexico, say their historians.

Indoctrinated through a Eurocentric system of education much like our own, most Mexicans know little or nothing about “the third root” that blended with their Spanish and indigenous heritages. The closer you look at this historical image, the easier it becomes to realize how African influences significantly enriched it through art, music, language, cuisine and dance.

As Mexico’s second president following the toppling of Spanish rule, Guerrero, a gallant Mexican Revolutionary War general, was sometimes mocked as “el Negro Guerrero.” But today the state he served carries his name. His family settled in Tixtla, a town 100 kilometers inland from Acapulco, a key port of entry for slave ships which consequently has a large African population.

During Mexico’s War of Independence, Guerrero’s father Pedro, a supporter of the Spanish rulers, asked his son for his sword to present to the viceroy of New Spain as a sign of good will and surrender. Vicente refused, proclaiming, “The will of my father is for me sacred, but my Motherland is first.” His quote became the motto of its southern Mexican state of later named Guerrero in his honor.

This article was originally published in Hispanic Link News Service.

Andy Porras, a retired teacher and publisher, has been a contributing columnist with Hispanic Link News Service for nearly three decades. He resides in Sacramento, Calif., and can be reached at andyporras@yahoo.com.