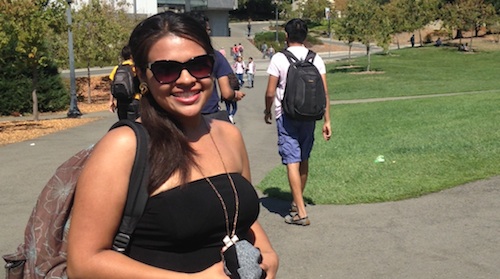 *This is incredibly inspiring. About a young woman, a child of immigrants, who follows her dreams, and creates her own path with a clear goal. We can all relate to that. VL

BERKELEY, Calif. – When Ana Aceves was 12 years old, she sat on her parents’ front porch in the Central Valley city of Merced, California, looked up into the night sky and had an “out of body experience.” She saw herself on her porch, then her city, and state, planet, and finally the stars.

It was then the energetic 23-year-old UC Berkeley senior says she knew exactly what she wanted to do. “I ran into the house and told my mom I wanted to be an astrologer,” she explained with a loud chuckle. “I think you mean an astronomer,” her mother corrected.

Today Aceves, the child of Mexican immigrants and the first in her family to attend college, is double majoring in Astrophysics and Media Studies. She’s the first to admit it’s an unlikely combination. Indeed, she is the only student on this sprawling campus of some 30,000 undergraduates with that dual focus.

Thanks to a prestigious fellowship from the American Association for the Advancement of Science (AAAS), she is now using it to help to expand science programming for one of the nation’s largest Spanish-language broadcasters, Univision.

Aceves’ parents met in Merced, though both emigrated from the same area of Michoacan, Mexico to Central California in the mid-1980s. Neither finished college, though Aceves says before leaving Mexico her father began a degree in math and physics, later dropping out to support his parents and siblings.

“When my [younger] brother was born, he had a lot of health complications,” she said. “My mother got really frustrated because she couldn’t communicate with the nurses, so she resolved to learn English.” There’s a picture of Aceves together with her mom in their graduation caps and gowns sitting on the mantle in her parents’ home. “I’m very proud of her … she’s my inspiration.”

But despite the family’s closeness, Aceves realized early on her opportunities in Merced were limited and that to succeed she would “have to go elsewhere.”

After debating between UCLA and Berkeley, she chose the latter, falling in love with the campus and because of the shorter travel time to visit home. Once there, she opted on Media Studies as a backup major, recognizing that math wasn’t her strong suit. “I knew I was going to combine them,” she said of her degree choices, “I just wasn’t sure how.”

It was during a study abroad program in Canberra, Australia in the spring semester of 2013 that she first began to figure that out. She enrolled in a science communications class that involved organizing a conference around a specific topic – that year they chose the future of climate and space exploration. Aceves volunteered to emcee and gave a talk on planetary exploration.

“By the end … I realized I really like talking about other people’s research,” she noted. “It hit me that this is what I want to do.” After coming home, she took it one step further, asking herself: “What if I do it in Spanish?”

The answer came in April, when she received the AAAS Mass Media Fellowship for Scientists and Engineers, a 10-week program that pairs students with media outlets nationwide. This year was the first time that two positions were given to fellows working in Spanish media.

Aceves was the only undergraduate to be awarded the fellowship, and learned of her acceptance on her brother’s birthday. “I just screamed. It was just this amazing thing and it seemed like it was made for me,” she said.

At Univison’s headquarters in Miami, Aceves worked on the station’s website scripting and producing science videos from the ground up. Of the more than 400 reporters in the building, she says, she was the only one doing science.

“There is so little in Spanish that addresses basic science questions,” she noted, adding that when she pitched her first idea to her editor on why the sky is blue, she had to explain why in fact it is blue to her editor before she agreed.

Aceves produced three videos over the course of ten weeks, and is now working as a freelancer for Univison and Fusion, a joint venture between Univision and ABC targeting Hispanic millennials. She’s currently working on a video about space travel and Mars exploration.

Get rid of the novela

At 12-years-old, right around the time Aceves had her “epiphany,” her family’s cable subscription was cut. Her grades “skyrocketed” as a result, so her parents decided to keep the cable off, leaving Aceves with few channel choices, one of which was Univision.

“I watched Univision all day every day because that was the only channel we had,” she recalled. “I remember every Saturday morning Bill Nye the Science Guy would come on for half an hour in Spanish, and I would get up to watch.”

It was one of the only science programs available in Spanish for an aspiring young scientist like Aceves, who points to role models like José Hernández, the former astronaut also raised in the Central Valley by migrant parents.

But Aceves says she never thought about her Hispanic identity or the fact that there are relatively few Hispanics in science until recently, when she perused the names and faces of others in her program. “There was no one that looked like me,” she remembers.

Indeed, according to the National Science Foundation, Hispanics account for only 10 percent of all STEM-related degrees. Census data from 2011 show Hispanics make up only 11 percent of the STEM workforce. The number of Latinas within these groups is even smaller.

It’s something Aceves is hoping to change.

“My biggest dream … would be to have my own show in Spanish on prime time,” she said, noting her friends sometimes jokingly call her Carla Sagana, after the famed host of the show Cosmos, Carl Sagan. “Get rid of the novella, and put me in there. Let me reach out to a Spanish speaking audience, and encourage other women to pursue the sciences.”