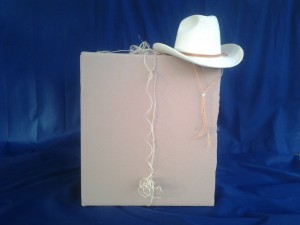 The train screeched to a halt in Empalme, Sonora. Don Luis adjusted his wide-brimmed sombrero over his head and clutched his small bag tightly to his chest. It carried the barest essentials: one change of clothes, including a thin shirt and a pair of pants for the journey that lay ahead.

He dipped his hand into a pocket and retrieved the identity documents he’d need to be contracted as a bracero. The men filed out of their seats, adjusting their norteño hats. Empalme represented one more stop along their journey –a junction, as its name in Spanish implies, a temporary way-station en route to El Norte.

Men sat cross-legged, others propped themselves against each other, their hats slumped over their faces, shielding them from the Sonoran heat. Lines of aspiring braceros snaked around the station. They shuffled their feet, kicking up dust, waiting for the bracero list from their home state regions to be called.

The loudspeakers above the station crackled for a few seconds. Braceros perked their ears, standing at attention. The contracting was finished for the day.

Don Luis, joined by two paisanos from his home village,dug his hand into a pocket. Against his coarse fingers, he felt the smooth round pesos inside the lining of his pants. His buddies did the same. Put together, this would buy them arroz y frijoles at the food stand.

“¿Y ahora, qué?” And now, what? He turned to ask his buddies, as sunset neared. He wiped sweat off his forehead.

They joined the throngs of men leaving the station in search of shelter. Dust coated their shoes and sandals.

By evening, Don Luis and his paisanos walked the neighborhoods of Empalme. Men, women, and children spilled from their homes. They lounged in their front yards, scantily dressed in thin shorts and t-shirts.

“Un peso,” a man in shorts said to them, as he walked across his small yard. “¿Cuántos?” he asked, leading them into his house. How many?

“Tres,” Don Luis was about to say. But by then, ten braceros gathered at the door. They each drew into their shirt pocket, pants, or bag. One peso per bracero. The man led them indoors, as Don Luis and his paisanos laid cardboard slats on the ground. For a peso each, he furnished them with a piece of floor. It beat sleeping on the hot Empalme roads, nakedly exposed to passers-by.

The men laid the cardboard in neat rows. Don Luis laid his back on the cardboard. Its hard edges rubbed his spine. He lay next to his buddy. He wanted nothing more than to sleep and dream. It must be two in the morning now. He licked beads of sweat off his lips, salty like the rest of his body.

Salty like the lake next to the railroad tracks that he remembered from his first stint as a bracero. Destination: Salt Lake City in Utah. Los Estados Unidos had asked for brazos, arms to be put to work in the fields and on the tracks during the war. Those first braceros had boarded the train flashing the “V” for victory sign. Some had returned in ’43 and ’44, wearing jeans and belt buckles, and their wallets a little fatter.

So he’d followed their lead and boarded a train in Mexico and a bus at the U.S-Mexico border bound for Utah. The bus made a final stop in Reno, Nevada, where he’d slept two nights in barracks before arriving at the snowy bracero camp. Don Luis and the men shivered in their thin shirts. To battle the cold, he purchased a sheep-skin coat that ran down the length of his pants. With it, he survived the cold blasts working on the railroad tracks.

Now, he yearned for even a driblet of that icy wind to extinguish the heat radiating from his body. It never came, and neither did the sleep.

At dawn, the men rose from their cardboard beds and headed to the contracting station. A swarm of braceros paced back and forth. They waited. And waited some more.

The hunger pangs were not long in coming. Don Luis dipped into his pant pocket.

They left the station and soon found themselves on a street on the outskirts of Empalme. A man summoned them over. He stood outside his yard pointing to trash cans on the side of his home, a water hose, and a littered sidewalk.

“Clean the debris and trash from the sidewalk. Use a water hose to wash it all out. Just be sure to not splatter too much mud.”

They worked through the hollow in their stomachs. When all was done, they had earned a few pesos each and a meal for the day.

That night, it was back to the cama de cartón. Don Luis rested his head and body, in search of sleep. But it wouldn’t come, just like the work contract that hadn’t come today.

At dawn, a smaller number of braceros congregated outside the contracting station. Loudspeakers blared out names. For the unlucky, it was the call to surrender. Holding their small bags at their sides, braceros trudged back to the depot and a trip back to their village or some other place to try their luck.

Don Luis watched them go. They boarded just as they had arrived: with small bags tucked under their arms, sombreros atop their heads. But bowed lower this time.

Just then a fleet of buses circled the station and pulled into the depot. Brakes screeched. Doors opened wide. The men filed out of the bus, some carrying boxes.

Don Luis walked towards the bustling crowd. Suddenly, he spotted a familiar face. A voice drew near, as a hand, calloused just like his, reached for a handshake. It was a good friend. He carried bags.

The man began to rattle off all the places he’d been, all the things he’d seen. Don Luis stopped him short.

“Mire, no me platique tanto. No hemos comido. Denos algo.” Look, don’t rattle off so much. We haven’t eaten. Give us something.

The paisano reached into his pocket, and dropped several pesos into Don Luis’ hands. He put his arm over his shoulder. Then he gathered his belongings and headed towards the buses departing south.

Don Luis took the money. The aroma of rice and beans from the food stand beckoned him. For the first time in a long time coins clinked in his pocket, weighing down his pants. The money carried them through another three days.

He and his buddies waited each day at the contracting station. The coins in his pockets dwindled. And then the loudspeakers crackled.

“Ya salió la lista!” At last, the list of braceros.

Outside, Don Luis played with the few remaining coins in his pocket, turning them over and over in his fingers.

He hadn’t yet stepped inside the contracting station, but already, his mind was churning. If he was lucky enough to get a three-month contract, he’d walk into a money order station and send almost all his money home. With a six-month extension on that contract, he’d buy cloth for his wife and the girls to order tailor-made dresses. He’d get shirts and pants for the boys.

And if the dollars stretched far enough, he’d buy a battery-powered radio for his family. It would be one of the few in his village back home without electricity. He’d package it all with great care and tie it with twine inside a sturdy brown cardboard box.

This story was originally published in TellYour True Tales.

Celia Viramontes was born and raised in Los Angeles. This story was taken from the book, Tell Your True Tale: East Los Angeles, which grew from writing workshops given by Sam Quinones at East Los Angeles Library. Contact her at oclaa@yahoo.com

You can read other pieces by buying the book — Tell Your True Tale: East LA — that we produced out of the workshops on Amazon.com.