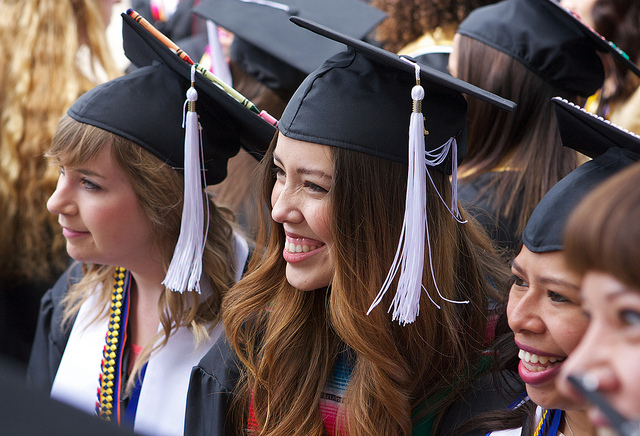 *The fact that more Latinos are entering and staying in college could be the result of systemic and generational changes in attitudes towards higher education in the Latino community. That, and the fact that retention programs  for Latinos have gained some traction. VL

As Yesenia Felix sits in many of her college classes, she notices one thing. She is one of only a few Latino students occupying the seats. The 18-year-old freshman believes although she might be part of a minority population at Aurora University, this will soon change. Research shows, she might be on to something.

Today, there are more Latinos enrolling in college than ever before. A record 70 percent of Hispanic high school graduates in the class of 2012 enrolled in college, with the previous record at a 69 percent enrollment rate. This is two percentage points higher than the rate among their white counterparts, according to a Pew Research Center analysis of new data from the U.S. Census Bureau.

What is causing this influx of Latinos entering college?

Research shows Latino families are placing a higher importance on education. According to a 2009 Pew Hispanic Center survey, 88 percent of Latinos ages 16 and older agreed a college degree is necessary to get ahead in life today.Richard Fry, a senior economist for Pew Research Hispanic Trends Project and conducted the study, said there are two leading factors contributing to this rise. The first being a push from Latino parents for their children to enroll, and the second being the recession.

While parents might be sending a clear message to their kids about receiving a diploma being mandatory for their success, the weak job market caused by a downturn in our economy has also pushed Latino high school graduates to continue on with their education. The same job market, Fry said, is much different for their white counterparts.

Though Latinos are entering college at a higher rate, it doesn’t necessarily mean they are graduating at the same rate as others.

Vice-President of Illinois Latino Council on Higher Education Jose Perales said one of the factoring reasons many Hispanic students do not graduate at the same rate is because they are first generation pupils. He said they often do not have the means or support to continue on, but Perales thinks this retention rate will decrease as more Latino families understand the importance of an education.

“There has been infrastructure changes over the years to help this community specifically think of college as an option,” Perales said.

Dr. Eva Serrano, professor and director of Latino Initiatives at Aurora University, agrees with both Fry and Perales that a recent push from Latino families to attend college is one of the leading factors more high school graduates are enrolling in college than ever before. However, she adds an interesting outside factor as to why these families are taking this initiative.

“I think to have Spanish-language media reinforcing the importance of staying in school and going on for a college degree helps a lot of our Latino families,” Serrano said.Dr. Eva Serrano, professor and director of Latino Initiatives at Aurora University, agrees with both Fry and Perales that a recent push from Latino families to attend college is one of the leading factors more high school graduates are enrolling in college than ever before. However, she adds an interesting outside factor as to why these families are taking this initiative.

Felix agrees, and she said her parents watch outlets like Univision and hear success stories  encouraging them push her to go to school and do well. She said she believes Hispanic media outlets are sending a clear message: Latinos need to enroll in college now.

“I think now it’s more important because in the past decades, we’ve had low enrollment percentages or ratios,” Felix said. “So I think we just want to strive forward, raise those percentages and pretty much be equal to the other racial groups,” said Felix.

The most recent data available from Pew Hispanic shows that in 2011, only 14 percent of Hispanics ages 16 to 24 dropped out of high school, half the 28 percent it was in 2000.

Leticia Rosalez, 18, also a freshman at Aurora University, said a lot of her Latino friends are going to college. She said many of them are even picking top universities.

“I think Latino parents are pushing their kids to… better the living situations they’re in now,”  Rosalez said.

Since Rosalez is the first grandchild from both sides of her family to go to college, she has always been told she must set the example for her younger siblings, who, she adds, all plan to go to college.

Whether or not this trend will continue is the still unknown. Fry said he doesn’t know if this higher percentage of Latino students entering college will extend into the most recent graduating class, but Felix and Rosalez can help are proof this new trend has the possibility to grow.

“I believe that we will see more Latinos going to college,” Rosalez said. “It’s amazing how much we’ve progressed over the years.”

This article was originally published in Latina Vocies.

Crystal Ramirez recently graduated  from Columbia College in Chicago with a Master’s degree in journalism. She is also a frequent contributor to Latina Voices.