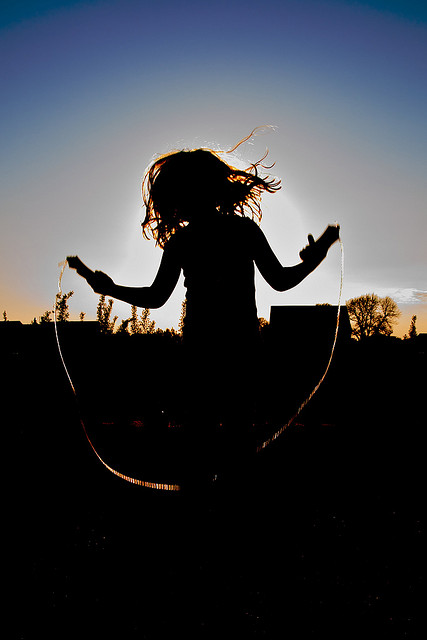 “Gordiflona,” I would hear mamí whisper to my aunt, as I skip alongside them on our walk to the store. Moments before, my straight black hair was flopping in the warm June wind. I was all smiles, feeling the sun deepening my brown skin. It’s the late 80s, and I am eight years old. I am in mid-skip, feeling boundless in the air. Sweat is beginning to collect over my brow when I hear it. On this day, I am so happy that even my little brother Johnny crushing my toes with his big wheel doesn’t enrage me. Any other day I would’ve popped him in the head for sure. Not today, though. It is too lovely. The long Chicago winter finally gave way to heat. Johnny and me both are giddy, as if  we just got let out on parole.

The strange, grownup world of whispers.

To be fair, my mom was trying to be quiet. She was using that voice mamas use when they’re trying to gossip when they can’t get away from the kids. So they begin their sordid re-telling of other folks’ state of affairs in whispers in front of their kids, who are not supposed to listen.  I know I do this myself nowadays. This is dangerous because the kids can still hear the conversation, but make out only about 47 percent of what’s being said. This is enough to get some of the characters in the story right, but kids still have to fill in the blanks and create plot twists. They make no sense because the adult universe is still inconceivably strange to them.

It’s undeniable when I hear “Gordiflona,” surrounded by a bunch of other undecipherable mush. I hear it clear and sharp, and it clips my wings. I fall back down, feeling clumsy, and all of the sudden very ugly. Dusting off my wings, I try to clarify.

“Who are you talking about,” I said.

I know two things. One is that I might get smacked for asking that question, and second is that I know the answer already. Gordiflona is what my mother started calling me when she was angry at me. But what had I done? I was skipping for Christ’s sake. My confident innocence is why I have the nerve to ask. I am hoping that mamí and tía are speaking ill of some other girl or woman who could not be satisfied with just one bowl of rice and beans. Then my mom explains.

“Your aunt was saying that you’re starting to slim out, but I told her that ‘no, that you still are a Gordiflona,’” she said. “Why are you so nosy, Negra?”

My happy bubble bursts. On top of that, I get in trouble for eavesdropping.

Gorda and floja, a kind of self-hating feminism.

Gordiflona is a compound word made up of two things. No self-respecting, pretty little Latina girl should be “gorda” (fat) and “flona,” a creative variation of “floja” (lazy). If you’re a fat and lazy female in my culture, you might as well be a ”good for nothing man.” It’s a self-hating feminism of sorts. There’s no doubt women make our world go around, but let me explain more clearly. Back then in my family, if you were a woman, it meant that you ran the household (kids, food, cleaning, etc). This was because either A) the man wasn’t around due to legal and other various reasons, or B) he was physically present and lived with the family, but did not contribute to the running of the household or take any kind of hands-on approach to raising the children. That was women’s work. But all of the women took pride in was their appearance — the face they showed the world. Hey, you can be struggling, but you better not look like it.

So now imagine what it felt like to be called Gordiflona. Mamí warned me that “no man wants a fat woman” and “fat makes you look ugly.” It’s all she knew. She was preparing me for her world. The world is hard for Latina women, both inside and outside of the home.  Beauty (having some style, a curvy body and a pretty face) and self-sacrifice make us valuable wives, mothers and daughters. It could even act as currency in the outside world. I grew envious of girls who just seemed to show up on this earth already thin, pretty, neat and helpful around the house. It was like they were fluent in a language I couldn’t begin to comprehend.

It turned into a personal quest.

Growing up, I was brought to tears by human pain and struggle. Not feeling like I had a place in my immediate universe drew me to those who felt the same. Compassion shaped me, and it often consumed me. I choked back my sobs whenever I heard anything about the civil rights movement in grammar school. I read everything I could about the Native American experience in the U.S. When my mother took me to live in Ecuador as a little girl, I automatically related most to the indigenous people, who were the poorest and most disrespected group in our community. I told my kindergarten teacher I was Inca. This search for understanding of who I was in this world of both struggle and resistance drove me to want to learn and go to school. In college, I studied sociology. Each Latin American studies class I took felt like therapy. Reading Latina and Latino intellectuals, learning my people’s history in the U.S. and gaining an understanding of the historical and racial roots of Latin America felt like a foundation was finally being built underneath me. It gave me breadth and depth. What I was learning gave me a language to describe the hard lives my family lived, it helped me name the injustices that permeated the air and I was fed by the examples of people who crafted dignity and solutions out of movements of struggle.

It makes my mother tear up whenever she remembers calling me “Gordiflona.”  She’s apologized to me so many times. Wiser and more at peace with life, she knows how children are born believing they are pretty great until others tell them different. She was so unbelievably young and angry then. As a little girl, she dreamed of being a doctor. Even after becoming a mother at 16, she still became a nurse.  Looking back, I see her as she was that warm June day. She was a 23-year-old mother of two, doing it alone because my dad was in prison, working the night shift at a nursing home and barely getting any sleep. She’s an amazingly generous mother and abuelita.  I thank her for so many reasons. Besides calling me Gordiflona, she told me I was smart. She instilled in me the need to work hard and take pride in my work.  When it was time to choose a high school, she talked to my teachers and made sure they sent me to the college prep high school. She then forced me to take extra classes each summer. When I wrote my first poem, she told me I was a great writer. There were times when she was my greatest critic, but she has always been my biggest cheerleader.

While it hurt me being called a Gordiflona, it also forced me to grow my soul, and I am so thankful for it.

End note about our men:

As the mother of three boys, I want to make sure I clarify that the men in our family, including many of the formerly “good for nothing” men, have evolved to become more complete human beings and partners. Some of our boys have been known to both wash dishes and wear high heels, along with, or instead of, their sisters. I love my gender-benders. I truly feel there’s a force in the world that is calling us all to be our better selves. Because of that, we’re doing a better job raising our boys and girls to be more confident, loving and free people.

Juliet de Jesus Alejandre was born and raised on Chicago’s Northwest Side. She is the daughter of an Ecuadorian mother and Puerto Rican father. She is married to a Mexican husband, and they have three beautiful boys. I was shaped by her abuelita’s stories and the pain she felt around her on the streets of Chicago, her family’s trials and the hope for healing. She works as a youth organizer with the Logan Square Neighborhood Association, a community agency that builds people power for education justice, immigration reform, affordable housing, youth empowerment, safety strategies that restore and wellness alongside Latino youth and families.  She writes in order to heal her own wounds, and so she can help shape a more just world for her children and the young people in her community and city.