Our Lady of Guadalupe is a symbol of faith for both Mexican Catholics and non-Catholics. The brown virgin, who has strong associations with indigenous culture in Mexico, appeared to campesino Juan Diego in 1531 on a hill in what is now Mexico City. Writer Ray Salazar reads his essay about explaining La Virgen to his daughter, a budding young Chicana feminist. 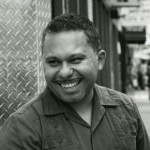 Since 1995, Ray has been an English teacher in the Chicago Public Schools.In March, The White Rhino tied for second place in the Best Blog category of the Education Writers Association contest: the 2012 National Awards for Education Reporting. In 2003, he earned an M.A. in Writing, with distinction, from DePaul University. In 2009, he received National Board Certification. His writing aired on National Public Radio and Chicago Public Radio many times. An editorial appeared in the Chicago Tribune. Two of the posts here appeared on CNN’s Schools of Thought Blog.Ray also writes for San-Antonio-based News Taco, which provides news and insights from a Latino perspective. For thirty years, Ray lived in Chicago’s 26th Street neighborhood. Today, he lives a little more south and a little more west in the city with his wife, son, and daughter.