When the Arizona Department of Education banned 90 books from its public schools for being “subversive,” ban opponents struck back. They set up underground libraries across the Southwest. And in Albuquerque, they organized a banned book reading club.

This Article was originally published in Latino USA. 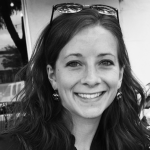 Carrie Jung began reporting from New Mexico in 2011, following environmental news, education and Native American issues. She’s worked with NPR’s Morning Edition, PRI’s The World, National Native News, and The Takeaway. Carrie graduated with a masters degree from Clemson University in 2009. She currently serves as Morning Edition Host and reporter for KUNM and The Fronteras Desk.