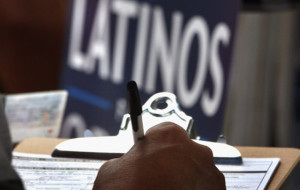 After Tuesday’s governor elections, Republicans in Congress established that there must be a better way to alter the landscape for their party after recognizing the strategic importance of Latinos for future elections.

In New Jersey, Gov. Chris Christie was boosted to a blowout victory by more than 20 points in part because he won half of Latino voters. According to exit polls, Christie improved his standing among Latinos by 18 percentage points over his first run for governor in 2009.

“I think the national party is going to draw inspiration from what Christie did,” said John Feehery, a Republican strategist. “The bigger lesson is you can’t just go to Latino communities six months before an election and say, ‘Hey, I need your vote.’ ”

Christie went into the race with a record on immigration that was strikingly at odds with the dominant views of his party. He has long supported a pathway to citizenship for illegal immigrants and even stated that New Jersey should offer in-state college tuition rates to young dreamers during his campaign. Additionally, he  had a full-time director for Hispanic outreach and began running ads in Spanish in May.

Republican leaders in the House of Representatives are currently facing growing pressure from a wide array of business, labor and religious groups to hold votes in coming weeks on immigration bills, including a measure to deal with 11.7 million immigrants here illegally.

Christie’s re-election, which lifted him to early presidential front-runner status, came after a campaign with ambitious outreach to Latinos. His “you get in, you build relationships, you build trust” mentality really demonstrated how doing so, the Latino community will be more willing to give government officials a chance.