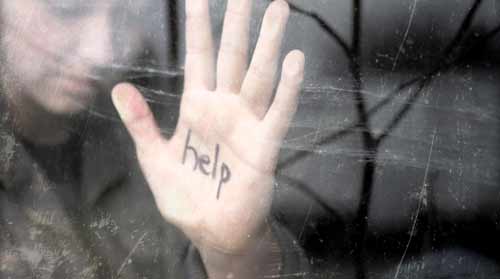 That’s the message The Life Link, a Santa Fe based agency, is sending out to human trafficking victims. The message comes with a textable number 505-438-3733 that connects victims to services and counseling.

The number is plastered on a city of Santa Fe bus, two bus stops and posters in hopes that victims will see it and find their way to freedom.

Anthony Maes said that everyone needs to know about and watch out for human traffickers.

He’s in charge of the New Mexico Human Trafficking Task Force, an initiative of Gary King, the state’s Attorney General.

“These things are occurring in our back yards, down streets and five miles from here,” Maes warned.

Human trafficking happens when human predators coerce and enslave others for money and their own purposes.

“We are seeing children, men and women trafficked for sex and labor purposes,” Maes revealed during an Aug. 1 presentation in Albuquerque at the Community Summit on Community Violence sponsored by the New Mexico Attorney General’s office.

Across the world, hundreds of thousands of people are trafficked every year – many are children who are forced into sex work because there is a lot of money in it for traffickers. It’s estimated to be a multi-billion-dollar industry.

Sanchez said that traffickers prey upon people who are experiencing hardships like homelessness and poverty.

“This pre-disposes individuals to be trafficked due to their vulnerability,” she explained.

Once in captivity, the victim’s identification and personal documentation are taken away from them and they are often beaten, raped and threatened.

“There is activity in the Southwest. Reports are coming in from the Bureau of Indian Affairs,” he revealed, adding that traffickers often use tribal lands to escape detection crossing state borders.

“These human traffickers will go miles off the Interstate to evade state police,” Souza said.

Maes indicated that human trafficking is often hard to detect.

“It’s a hidden problem in plain sight,” he said.

Advocates say that’s because the trafficker can be just about anybody – a friend, boyfriend, neighbor, parent, spouse, landlord, or a member of a gang or organized crime.

But Maes noted that the methods human traffickers use can be recognized and reported.

“Remember these three words: coercion, force and fraud,” he told a break-out group of about 20 law enforcement officers, social workers, advocates and students at the AG’s summit.

Watch Out for Money “Offers”

“Jasmine,” a 50-year old Navajo woman who lives in Albuquerque, recalled how she was approached when she was younger by a neighbor who pretended to be her friend.

“She was warm, wanted to chat and be hospitable,” Jasmine recalled. Then, she offered Jasmine $10,000 to marry a friend from her native country, Bangladesh.

At the time, Jasmine was a single parent of two young children stretching her budget to make ends meet.

“She was talking passports and going to his country. If I would have married him, there may not have been a way out. I thought, ‘This woman is trying to buy me. I could have become a slave,'” Jasmine said.

Maes told the community summit participants that human trafficking is modern-day slavery and it can take many forms. Victims are found working in massage parlors, brothels, strip clubs and escort services or as maids, farm workers, waitresses, janitors or panhandlers. But, they can also be found in families with boyfriends and parents selling their girlfriends and daughters for drugs or money.

While the words “human trafficking” and “prostitution” are often spoken in the same breath, Sanchez said a critical distinction needs to be made.

“Human trafficking victims are not prostitutes,” she said. “They do not have a choice. They have lost their right of liberty.”

But, she notes that this distinction hasn’t been accepted by society or family members, leaving survivors with a sense of shame and self-blame.

“It really devastates the victims when family members turn against them,” she said.

She gave an example of a young Native American woman who was exploited and trafficked.

“She can’t talk among her community because there is so much stigma about sex trafficking,” Sanchez said.

Jasmine, who was a schoolteacher at the time, said she was approached by a suspected trafficker and that families need to understand that it can happen to anyone.

“If this happened to me, it is happening to a lot of other women,” she said.

To stop it, the Attorney General’s office is calling upon everyone to help.

One thing to watch for: a man who brings a woman or girl into a beauty shop or a health clinic and stands over her the whole time, not allowing her to speak for herself.

Maes added that first responders also need to be alert.

“First responders may think it’s domestic violence. But, it may be a trafficking victim,” Maes said.

Recently, the Attorney General’s office has been reaching out to truckers.

Maes said he met with truckers from Las Cruces and Deming, New Mexico and El Paso advising them on how to identify signs of trafficking and to call a national hotline number anonymously when they see anything suspicious – 1-888-373-7888.

Maes said that he plans to meet with truckers in the Albuquerque area in September.

But trafficking doesn’t only occur at places like truck stops and strip clubs.

But New Mexico District Judge Stan Whitaker threw the case out because as the law is written now, prostitution is defined as occurring at a physical place, like a brothel.

Whitaker’s decision spurred Candelaria to sponsor Senate Bill 524 last year, which expands the legal definition of prostitution to include websites and other electronic media.

“We need to ensure that people are protected and our laws are up-to-date. Online pimping is a form of human trafficking,” Candelaria said.

Candelaria plans to work with other lawmakers and New Mexico’s Governor Susanna Martinez to get it passed in 2014.

Souza said that Native American women and children need to be aware of these dangers.

“Native women and children are in high demand as a commodity,” he said referring to specific sites that advertise to Native American women.

Souza said that tribes also need to update their laws to include media crime.

“They need to address it in their legal codes,” he advised.

Sanchez reported that since April, the 505-GET FREE number has had more than 200 callers asking for information and 13 people identifying themselves as victims.

Once the victim gains freedom, Sanchez said she needs help getting her life back.

“It is a long journey for recovery,” she said.

Sanchez explained that it involves both large and small steps. It range from helping the survivor change her hair back to its original color, to helping her find housing, a job and then when she’s ready, counseling.