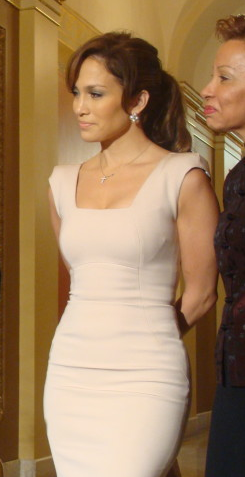 Size 2, size 8, size 12 — what is the size for “healthy”?  Latinas are often known for their voluptuous and curvy bodies. Just think Jennifer Lopez and her robust booty or Sofia Vergara and  her curvaceous hips. These celebrities are considered healthy pictures of beauty — and in many Latin American countries, they represent the image of a perfect, healthy body.

While a curvy body can also be thin, compared to the American standards, curvy women are usually considered overweight. In main stream America, women with curvier bodies are often looked at as overweight or unhealthy.

Thin as in narrow hips and thinner thighs, is in — according to U.S. mainstream media. Advertisements on TV and across the internet constantly encourage weight loss, measure reduction and just being thin. Are these depictions of body image healthy then?

Many Latinas who are born in other countries hold different standards for their body image than non-Latina whites (and even some Latinas) born in the U.S. In fact, for many Latin American cultures, weight loss and loss of curves in a woman is a sign of illness or depression.

A study of Puerto Rican immigrant women found they viewed weight gain positively. Extra weight was seen as a sign of prosperity and health. In fact, they saw a curvy body and a few extra pounds as an indication that a woman was ready and healthy enough to bear children.

The study found many of the women espoused ideals regarding body size and shape which depicted a more realistic idea of weight. The ideals, in comparison, were the opposite to the American thin-ideal of weight and health. The women surveyed were older, married and stood in a higher socioeconomic status.

Latino cultures are not the only ones that embrace a curvy body in a woman as a sign of health. A similar study conducted on refugees from the Horn of Africa living in Australia found perceptions of body image varied greatly between parents and their children. The parents viewed large body size as beautiful and associated it with wealth, much like the Puerto Rican women studied. They also associated a thin body type with illness and poverty. The children, however, saw thinness as ideal, a body image which was endorsed by their peers.

A study published in the Journal of Youth and Adolescence in 2006 found the greater acculturation into mainstream U.S. culture a young immigrant woman experienced, the more her preference for a much thinner body type increased. Interesting, especially when statistics show acculturated Latinos struggle with high obesity rates— more so than unassimilated Hispanics.

The study also found second generation Mexican American women had the highest rates of disordered eating among first through fifth generation Americans. A result of young women striving to fit in with U.S. ideals, as opposed to the curvy body ideals from their parent’s native cultures.TV watching plays a large role in this phenomena. Latin American women watch four more hours of TV daily than women in other ethnic groups, according to a study done at the University of Florida. This extra TV time makes Latinas much more susceptible to body image messages through the constant bombardment of diet and beauty advertisements.

As a result, Latinas in the United States display high rates of eating disorders, comparable to or greater than non-Latina white women, especially during college years. Latina women living in Latin America? Not so much. The greatest influences on the perception of an ideal body are the media, family, peers, society and the influence of male partners, says a study published in the international peer-reviewed journal Body Image.

Latinas may receive the message from their non-acculturated families that a larger and curvy body is beautiful. The message they receive from the media, peers, society and male partners, however, is a thin body is more desirable. The contradiction usually results in body image issues.

Can a curvy body be healthy?

It’s beyond appearances. While the perception of beauty in relation to weight and a curvy body seems to be in the eye of the beholder, the real question is can a curvy body actually be healthy? Several recent studies seem to prove so.

A curvy body, considered in this context as a few extra pounds distributed among wider hips and thighs and a more prominent derriere, can indeed be a healthy body.

A study published in the European Heart Journal found abdominal fat measurement was a better risk indicator for metabolic syndrome, or obesity, and cardiovascular problems than the traditional BMI.

How much a person weighs, or their individual measurements, are not necessarily the indicator of risk factor for health issues. A higher proportion of belly fat is, on the other hand.

Several other studies have found hip-to-waist measurements accurately indicate a person’s risk of other health factors, including high blood pressure, cholesterol, cardiovascular disease and obesity. The studies found the hip-to-waist ratio, or women with larger hips and thighs but smaller waist measurements, may still be healthy. This measurement is commonly depicted as a pear shaped body, in comparison to the apple shaped body, which has a larger waist size.A Danish study also found people with larger thighs, but not a larger mid-section, had a lower risk of heart disease and premature death than those with thin thighs. Thinner thighs — an American ideal — were linked to a higher risk of heart disease.

Oxford University researchers also found that storing fat on the hips, thighs and bottom is healthier as long as the belly fat percentage is kept low. Storing fat in these areas, as opposed to the waist and belly, may actively protect against diabetes and heart disease.

This means the Latin culture may have had it right all along. Women with a curvy body — larger hips, thighs and butt — are still pictures of good health. Thinner isn’t necessarily healthier. Real women, with real curves can still be examples of good health — and assimilating this might also benefit your emotional health and self-esteem.

This article was first published in Saludify.

Martha Garcia is a freelance writer living in Los Angeles. She writes for various magazines, newspapers & websites. Martha is the Faith editor for the Signal newspaper. She loves to travel, learn about new things and continues her pursuit of healthier living.