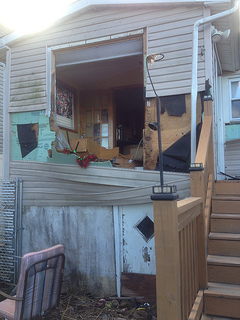 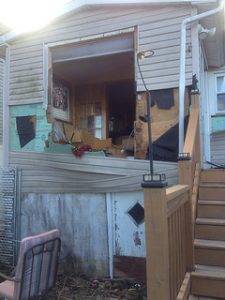 As usually happens, news stories about natural disasters and their aftermath in the U.S. miss the devastating effect that storms and earthquakes and such have on the communities of undocumented workers. There is no blame to be doled, it’s not so much a matter of fault as it is a consequence of circumstances: the undocumented live in the shadows and natural disasters pushes them further into the dark corners.

This past weekend, though, the Washington Post printed an Associated Press story about Mexican immigrants in New York and New Jersey and their lives in the aftermath of Superstorm Sandy. The top layer of the story exposed the basic problem;

Some of those who need help to get temporary housing and food are afraid to come forward because they risk deportation. And many have returned to damaged, powerless, moldy homes because they have no other place to stay.

The numbers are staggering. According tot he Census there are 2.3 million Latinos in the New York ?city area; and according to local non-profits at least 20,000 Mexicans were “hard-hit” by the storm in Staten Island alone.

The Mexican government has visited the area, looking for immigrants in the shadows, pointing them to places where they can find assistance – the problem being that in times of crisis officials wear military uniforms and immigrants will be afraid of them.

More than 735 people have signed up to receive economic help from the government of President Felipe Calderon, but there is only $180,000 so far to distribute, said the Mexican consul in New York, Carlos Sada. As of this week, 66 checks had been written to victims of the hurricane, totaling $110,000.

To compound matters, immigration officials have been conducting “limited street enforcement operations” in the area.

The agency will be “resuming normal enforcement activity, with continued emphasis on at-large criminal aliens, in the near future,” an ICE statement to The Associated Press said.

And to add another layer of problems for the immigrant workers, they mostly get paid in cash for daily labor so every day they go without work is a day they don’t get paid. If any good will come from the storm it’s that there will be more work now for immigrants in the clean up effort.

Groups that are part of the National Day Labor Organizing Network have also brought day laborers to do volunteer cleanup activities on weekends. El Centro del Inmigrante is trying to become a hiring center for day laborers, making sure that they work in safe and secure conditions.