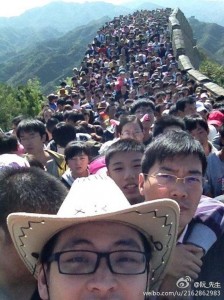 Golden week has come and gone and with every incarnation, the entire country is left a gasp. This time around was no different as tourist sites, airports and major cities were inundated with the nouveau riche.

There are 3 so called Golden Weeks throughout the year in which literally the entire country tries to take a vacation. This is the mass movement of people on a grand scale with 1.3 billion itineraries. The Golden Weeks usually coincide with a traditional festival and the Autumn week is in lock step with the Mid-Autumn Festival (also called the Moon Festival) which we in the West often associate with the harvest season. For a decent overview of the holiday, check out this Wikipedia link or simply google search “Chinese Moon Holiday”. Don’t be a huevon!

Travel inChinais typically congested but the Golden Week makes it feel like living in a sardine can. All transport usually increases in price with the most gauging occurring by the airlines. They mention supply and demand but they are being greedy. The same happens to us during Thanksgiving and Christmas so we can relate. Hotels fall into lock step. Restaurants the same. Everyone seems to understand that EVERYTHING will become more expensive, attributed to the Golden Week Tax. You decided to travel, now pay up!

I spent my time off traveling from Guangzhou to Shanghai and then onto the garden city of Suzhou. When I arrived there, I immediately hid out at my friends place until it was time to return to Guangzhou. It is difficult to describe the sea of humanity when traveling during this time so I will refer to recent picture of the Great Wall of China recently taken there by an anonymous tourist. The picture has been making waves across the country and is now well recognized, if not representative, of travel during the Gold Weeks. If you can find Waldo in this picture, you win!

Next up: Panda Express ain’t got nada on this!

Hector Flores is a writer, producer and entrepreneur finding his way through the modern maze that is China. After reading Rudolfo Anaya’s travel memoir “A Chicano in China”, he was inspired to blog, tweet and post on his own adventures as a curious chicano in China. Mr. Flores blogs and posts at www.chicanochino.com , tweets @chicanochino and can be reached atchicanochino@live.com.