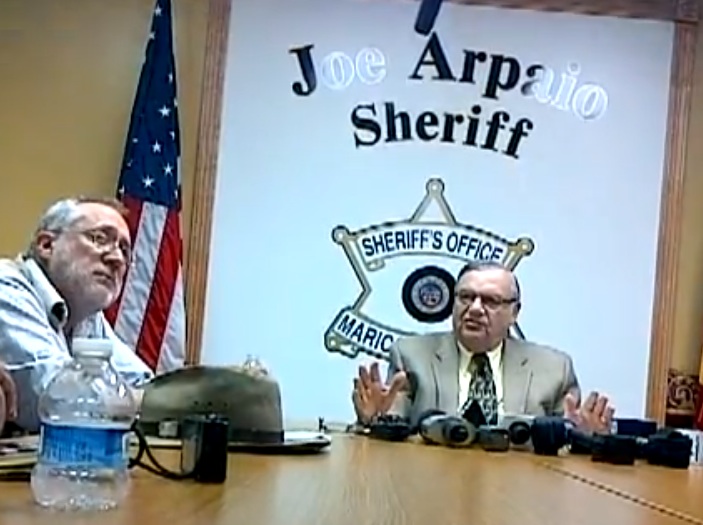 (Latino Rebels asked Roberto Lovato to record his thoughts and impressions about a meeting he and others from the Caravan for Peace had with Maricopa County Sheriff Joe Arpaio last week in Phoenix. Here is what Lovato sent.)

“America’s Toughest Sheriff” has the softest hands of any lawman in the West.

Observing Sheriff Joe Arpaio’s hands up close, it reconfirmed a basic understanding I had about him, the lack of which has led many to give Arpaio more anger than is healthy: that he’s more showman than lawman. I noticed the story of Arpaio’s hands during a meeting that he held last Thursday with Javier Sicilia, the poet and leader of the Caravan for Peace (Caravana) who had brought a small group of Mexican and US nationals to meet with “Sheriff Joe.” We were in Phoenix as part of a 21-city bus tour that seeks an end to the drug war that—along with the undeclared immigration war in Arizona and across the US—has defined Arpaio’s larger-than-life public persona for years.

We knew we were heading into potential conflict in Arizona and we found it directly inside Arpaio’s office, along with the tragicomedy of the yellowish, saggy-skinned and nail-bitten hands of the Tea Party icon. Arpaio rejected our initial request to meet with him and then changed his mind after we visited his office. He even went so far as to invite local media, who responded to his invitation within 10 minutes, as if they were on call and ready to accommodate the sheriff.

“I’d like to speak to your heart,” Javier said, in an appeal to a fellow Catholic in Arpaio. “Tell me where (in the Bible) it says that you have to humiliate human beings. Where does it say you have to hate your enemy?”

“I don’t like to talk about religion,” Arpaio responded, while putting is hands in front of him as if to push away an evil spirit or to cover his heart.

“You should not mix politics and religion…. It has no bearing on the illegal immigration problem or the drug problem,” Arpaio continued as he made manual buffers of his hands, which he also thumped on the table for emphasis as he looked at the cameras.

When Javier, a serious Catholic who regularly quotes Gandhi and whose bear hugs have become legendary in the Mexican media, offered his own hands to Arpaio in one of the less tense moments of a very conflict-ridden meeting, the sheriff responded by pulling his hands back and covering over one hand with the other. 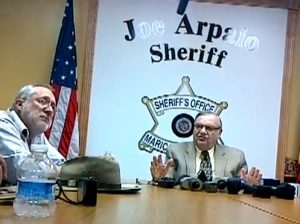 When Arpaio disagreed with everything from the bilingual interpretation of the meeting to US drug war policy, he mustered whatever energy there was in his 80-year-old hands to accompany his “Let-me-tell-you” talk, which has now become his stock-and-trade, both in person and on TV.

While his ham-fisted actions—denouncing, persecuting, and humiliating immigrants—are, indeed, reprehensible acts worthy of our repudiation, they are just part of the performance made obvious by Arpaio’s soft, operatic hands. Remembering this branded performance of fingers, fists, and other gestures may help us better keep our anger in check. It is a performance just like any other performance we might see anywhere else. Arpaio’s hands are telling us that we can still fight his vicious policies and practices, because in the end his finger puppets are just part of the tragicomedy that is “The Sheriff Joe Show.”

Roberto Lovato of Presente.org is currently traveling with the Caravan for Peace, and you can follow his updates at his Twitter page: @robvato.