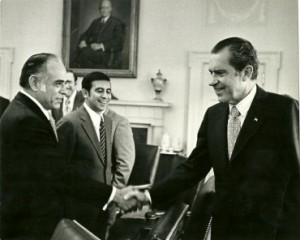 Four decades ago, Hispanics found themselves possibly exercising more power in a presidential campaign than at any time in American history — before or since.

It was 1972, and the campaign was that of President Richard Nixon who was seeking a second term against the backdrop of an unpopular war winding down in Vietnam and the social-cultural changes that the turbulent 1960s had wrought on America.

Watergate, its cover-up and the slew of abuses of power that ultimately led to Nixon’s resignation in 1974 have clouded that election and damaged, if not destroyed, the credibility of many of those involved in the campaign — including the almost three dozen or so Latinos who for a brief period were among the most powerful men and women in the country.

In that campaign, Nixon politicized most, if not all, of his high Latino appointees in his administration as well as a Cabinet-level group — the Cabinet Committee on Opportunities for Spanish-Speaking People — that had been established by the White House in 1969.

Although Nixon won a landslide re-election in 1972, historians have largely attributed this to missteps on the part of the Democrats, among them the selection of a vice-president who had to be withdrawn and the accompanying embarrassment when no top name Democrats wanted to be George McGovern’s running mate.

In 1970 and 1971, though, with polls showing him in political trouble, Nixon began all the dirty tricks against Democrats later uncovered by the Watergate investigations. He also began politicizing his Latino appointees and the programs they administered. The Nixon administration had more Latino political appointees than any presidency, including those of John F. Kennedy and Lyndon B. Johnson. Those numbers were not exceeded until President Bill Clinton’s administrations.

Tens of millions of dollars, if not hundreds of millions, were involved. Education, health, small business, community action and other programs were affected. At one point, something like $47 million dollars earmarked for Latino programs alone were involved. Some of this funding was on a one-year basis and ineligible for refunding — meaning it was only funding during that election year.

Worse, there were bribes, including to Latino judges, among them a prominent member of the bench in Houston — all just to get their support and endorsements for the president’s re-election.

At one point in the campaign, Nixon traveled to South Texas accompanied by many of these appointees, including Henry Ramirez, the chairman of the Cabinet Committee; Ramona Banuelos, the U.S. Treasurer; and Phillip Sanchez, the head of the Office of Economic Opportunity. They were with Nixon at a South Texas high school where the president played the piano and led the student body in singing “Happy Birthday” to a local Hispanic Congressman.

Nixon’s Hispanics did their political job well. Nixon won California, Texas and the Southwest by big margins. He received 40 percent of the Latino vote, by most estimates and analysts.

But it all quickly unraveled. The Watergate investigation by the House Judiciary and the Senate Select committees subpoenaed millions of White House and administration documents that included memos, reports, expenditures and enemies lists related to the political wooing of Hispanics alone.

A few of the Nixon’s Hispanics were subpoenaed to testify before committees, which heard televised testimony on the alleged wrongdoings and the impeachment of the president — but they missed being on prime time.

By the time the hearings got around to the Latinos, the impeachment calls and Nixon barricading himself in the White House had become the story. It was as if the sordid tale of corruption and wrongdoing had sickened America and no one wanted to watch the hearings any longer. Everyone wanted Nixon gone.

Numerous Nixon officials went to jail, but I don’t recall any of the Latinos even being prosecuted. They all scampered away, humiliated and seeking anonymity — the political careers they thought lay ahead had all gone  up in smoke.

I covered this story as a young political reporter in Texas. Years later, I visited again with one of the Nixon Hispanics in Los Angeles. In fact, I threw a vegetarian tostada at him, ruining a suit, in defending my then English girlfriend whose honor I thought he had offended with some off-color personal remark.

Henry was still angry at me over my reporting and threatened to file charges. Assault with a deadly tostada. He remembers it to this day, but he talks to me still.

“You had quite a temper on you,” he says.

Ramirez, now 83, has his memoir, “A Chicano in the White House,” coming out later this year, and he still insists that Nixon was the best presidential friend Latinos ever had.

“There was one day when Nixon called me into the White House that I’ll never forget,” he said in a phone conversation this week. “Nixon had lived among Mexicans and Mexican Americans in Whittier. He knew us. He knew us intimately.

“He says, ‘Henry, we anglos have built an invisible wall of discrimination against your people, and you and I together are going to knock that wall down.’

“That’s all Nixon wanted to do. That’s all we were really trying to do.”

Los Angeles-based writer Tony Castro is the author of the critically-acclaimed “Chicano Power: The Emergence of Mexican America” (E. P. Dutton, 1974) and the best-selling “Mickey Mantle: America’s Prodigal Son” (Brassey’s, 2002). His rite of passage memoir, “The Prince of South Waco: Images and Illusions of a Youth,” will be published in 2013