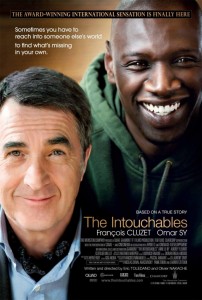 By Gabrielle Bondi, The Young Folks

Thinking over all the theatrical releases I’ve watched so far in 2012, not too many stand out. Of course, big box office movies like The Hunger Games and The Avengers instantly come to mind. Yet, The Intouchables, a foreign language film, rings as loudly as those two box office juggernauts. I saw The Intouchables over a month ago, and I was completely taken by surprise by how wonderful this movie is.

The story follows how an aristocratic quadriplegic forms a lasting friendship with young man from the projects. Philippe (François Cluzet) is the aristocrat in search of a new caretaker. Omar Sy plays Driss, one of the many people applying to be Philippe’s caretaker. However, Driss doesn’t really care about landing the job; he just wants them to sign off that he showed up so he can collect some form of unemployment. The staff is shocked by Driss’ brazenness, but Philippe finds that to be refreshing and decides to hire him for a one-month trial as his caretaker. Driss, comically, doesn’t immediately take to assisting Philippe, but as the men spend more time together, they start forming a heartwarming friendship.

I first heard about The Intouchables when Jean Dujardin lost the César (like the French version of the Oscar) to Omar Sy for his work in this film. The Artist won everything at the Césars, so Sy’s performance must have really connected to the French. And I have to agree that he and the rest of the cast are splendid in this movie. It’s a character-driven film, and Philipee and Driss literally drive into your heart.

Another surprise about the movie was how funny it was. I spent most of my time laughing when watching this film. Driss is hilarious and together with Phillipee, they make an unexpected comic duo. In the midst of all the laughs, there were touching and emotional moments and it all felt balanced well within the story.

I left The Intouchables with a big smile on my face. It’s one of the best movies to come out so far this year. Don’t let the subtitles deter you from seeing it! It is a French movie, but you’ll get so immersed by the story that you’ll soon forget you’re even reading subtitles. I honestly can’t recommend this film enough.

The Intouchables hits select theaters on Friday, May 25th.

The Young Folks is a website dedicated to give everyone a young perspective of what’s new in today’s pop culture. We will talk about the latest albums, movies, TV shows, concerts, and books that everyone is talking about, etc.