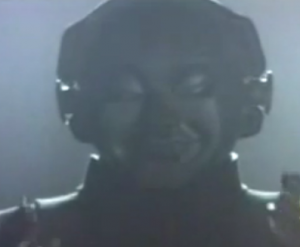 I grinned. With a few musical notes a dystopian future was created in my mind.  A back-story of fascism, suppression of expression where music is banned.  Without context, the song’s strange refrain, Domo Arigato Mistua Robotto, Mata Au Hi Made is absurd. Knowing how the refrain fits into the album make makes it weirder and more awesome.  When I switched to the classic rock station in mi trocka, I expected something from Metallica’s black album, instead my cabin filled with the progressive sounds of  Mr. Roboto, by Styx. It was a great feeling..

I love Styx. They were a 70s era band that created a science fiction concept album; Kilroy was Here.  Styx wasn’t a top-flight rock band. Their biggest hit was “Come Sail Away,” a Duvalin sweet song. Despite releasing that type of song, they expanded their vision by being ambitious. They provided us with their vision of the future via an audio science fiction book.

And I wondered, where are the Latino concept albums?

Concept album are united by a theme. Many musicians use the collection of songs to highlight issues. A plethora touch on science fiction topics but that is not always the case. Kiloy Was Here is a prime example of utilizing science fiction to highlight an issue.  Here the issue is censorship.  Music is suppressed by the Majority for Music Morality. The hero is thrown in a prison by the establishment, for rocking out.  Pero, there is a ray of hope. The hero escapes the private-jail using Mr. Roboto, the robot with Japanese parts.  Freedom regained, the Hero continues the fight for rock ‘n roll, singing “we will be strong, we will be right, so stay with me know, the future is ours!” As a science fiction nerd, I nerded out during my first non-stop listen to album. How could I not? It was Star Wars for my ears.

Just as film has Star Wars, Star Trek, and Robocop, there are a pantheon of concept albums with science fiction settings: David Bowie created the persona of Ziggy Stardust, an androgynous undocumented visitor from Mars.  In The Rise and Fall of Ziggy Stardust and the Spiders from Mars, Ziggy reveals that El Mundo has only five years left and tries to provide hope through music. Pero, he is corrupted by the rock lifestyle of drugs, sex, and too many Ganzitos pastries.  Also using the messiah theme, The Who’s Tommy, a deaf, blind and mute kid, who is an awesome pinball gamer, does saves the world.  A very bad movie was later based on it, which sucked because like the old proverb states, “the books are better than the movie.” In much the same way, the concept album is better than the movie.  Finally, the Canadian band Rush turned up the Volume to 11 in concept albums by releasing a trilogy of them: 2112, A Farewell to Kings, and Hemisphere. I especially like song, The Temple of Syrinx from 2112. I suggest listening to the trilogy sequentially while sampling a nice bourbon.

Despite my love for science fiction, I prefer the abstract concept albums.  There is no story. The most well known is Pink Floyd’s Dark Side of the Moon, where each song touches on the emotions and temptations of the modern persona.    You create the images and the personal narrative with each song, instead of having the album impose you with a story line. For example, Money is about greed, but it can also touch on envy or remorse.  With a color palate provided, you make can mix the colors and make happy or sad little trees. I created my Gronk-esque little trees was by listening to The Downward Spiral by Nine Inch Nails.

The refrain  nothing could stop me now echos throughout the album.  A man confronted with addiction that inflated his sense of worth for a moment, only to turn into self-loathing and anger when the pain returned. But, because the nameless drug made him feel better for that brief moment, was it worth it?  Listening to the The Downward Spiral made deeply wonder about those ideas of addition and emptiness in a unique manner.

They weren’t the typical songs of the early to mid 90s albums, where the songs were full of Generation X angst, but failed to abstract the emotions. This was an album to listen to. It was emotionally liberating. It was okay to be pissed and angry at one’s perceived isolation.  Pondering one’s purpose in the universe was valid.  The danger was dwelling to much in it by discrediting and picking away the positives. That lead to a downward spiral.  High School sucked and the life of a Latino Nerd teenager many times sucked,  pero problems have solutions.  I would graduate and go on to better things. Listening to it during times of stress reminds me of that.   Concept albums have that power.

So, I would be ecstatic if Pitbull or Los Tirgres Del Norte did a concept album.  Or anyone with a musical instrument and imagination.  Latinos, we  can do it!  We have the music ability. We have afro-cuban beats and accordions.  We love science-fiction and Luis Buñuel.

Imagine a J-Lo album on the intergalactic war between the Canuts people fighting their Canijo overlords across the Big Pun sector ! What about Chingo Bling highlighting the marginalization of the borderlands in the 21th century via songs Anzaldúa and NAFTA? I would buy those albums.

The guantes have been thrown.