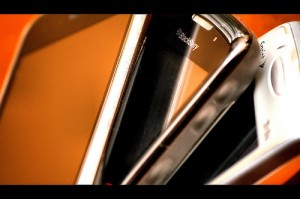 My tia received an I-Pad last Christmas which, of course, led to my abuela and 7 year old prima fighting over the toy. My abuela has never turned on a desktop computer and has a fuzzy understanding of what the internet actually is, but when she gets going on Fruit Ninja the expression of bliss on her face must be seen to be believed. My prima, on the other hand, learned to type on a touch screen, is far better at Angry Birds then I ever will be, and interacts with the internet more on her mobile device then she ever will via a desktop computer. This experience is a microcosm of the changes facing the country and telecom industry in response to the profound shifts in technology and demography.

Technology adoption rates among Hispanics are, for the first time, not only keeping pace with the general population, but the annual Nielson Report on Hispanic Consumers reveals that they are actually leading the growth in mobile media adoption. 60 percent of Hispanic households own at least one video and Internet enabled cell phone compared with 43 percent of general households. Hispanics are 28 percent more likely to own a Smartphone than non-Hispanic Whites. Hispanics outpace all ethnic groups in mobile data service consumption including music and picture downloads. The growing Hispanic population, along with its relative youth and expanding buying-power, will have significant implications for the telecom industry.

The U.S. Hispanic Buying power amounted to $1.1 billion in 2011 this number is only going to grow as this population is expected to grow 167 percent over the next 50 years. More importantly, though, this population is incredibly young. 23 percent of children under 17 in the country are Hispanic. The facts are clear: Hispanics will be huge consumers of mobile media technologies in the near future and their share of the market will only increase with time.

While Hispanics have generally lagged behind the general population in home broadband usage, their current consumption of mobile media is actually falling in line with overall internet consumption trends. The national average for home-based broadband consumption is 76 percent, while Hispanic usage is only 62 percent. Yet overall home broadband usage is in decline, with penetration and desktop sales both falling. Many analysts note that mobile media devices are supplementing desktops or replacing them all together.

These surging mobile adoption rates converge with rising Hispanic Per-Capita income, making US Hispanics now wealthier than any of the highly coveted BRIC Countries. With that much disposable income and the fact that Hispanics utilize mobile media usage more than any other group, producers of content must start paying closer attention. Compared to the general population, Hispanics spend 68 percent more time watching video on the Internet and 20 percent more time watching video on their mobile phones.

By next Christmas I will have finally gotten rid of my underperforming Blackberry, which means that for five minutes I will be at the same level of technological proficiency as my prima. For the holiday she will get the next generation version of whatever I get, leading to much teasing. As for abuela, there is sure to be good news as well. My tia already has her order in for the Ipad 3 which will give my Abuela all the time in the world to play Fruit Ninja on her brand new/old first gen Ipad. As goes the Ramos household, so goes the country. Who would have thought?

Kristian Ramos is a Policy Advisor at NDN who covers immigration, the border and Hispanic Demographics. Before working at NDN, Kristian worked in the United States Senate for Majority Leader Harry Reid in the Senate Democratic Communications Center. He is proud to say that he grew up in a South West Border City, and reports that it is not a war zone.