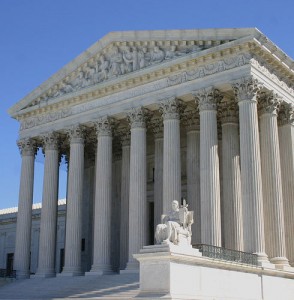 Two years worth of posturing and protesting, testing and taunting, about immigration and states rights will come to a head this Wednesday when both sides of Arizona’s controversial SB1070 argue their case before the Justices of the U.S. Supreme Court.

Here’s what you need to know: the law passed by the Arizona legislature and signed by Arizona Governor Jan Brewer gave the state police the expanded power to ask the immigration status of anyone they stopped, for any reason, and to hold people suspected of being undocumented immigrants.

The law was promptly challenged by the Justice Department as an over reach of power, arguing that only the federal government has the power to enforce immigration laws.

That’s the crux of the matter. From that point there are many and varied spin-off debates about whether the feds have lived up to their responsibility of defending the nation’s borders; about whether the borders are or are not under siege; about the role of immigrants in American society and economy, etc…

But it all comes back to the basic question of state’s rights and federal responsibilities – but more importantly, for the matter at hand before the Court on Wednesday, it’s all about federal powers.  So far, a string of lower courts have struck down some sections of SB1070, but  Supreme Court observers think that right-leaning Justices at the highest court could, according to the New York Times:

redraw long-established boundaries between the federal government and the states when it comes to immigration enforcement, which has been considered a nearly exclusive federal preserve.

So if the Supreme Court re-writes some of the rules regarding immigration enforcement, then state’s like Georgia and others, who patterned their own immigration laws to mirror Arizona’s law, would take it as a signal to move ahead – notwithstanding the negative effects on their economies, as NewsTaco has reported.

Not to over-simplify the issue, but the arguments can be distilled to this: one side says it wants to help catch undocumented immigrants, the other says they’re getting in the way and should let those assigned the task do their job. But the stakes are much more important on an historic level, again the NYT:

Lucas Guttentag, a law professor teaching at Stanford who was the top immigrants’ rights lawyer at the American Civil Liberties Union, which has participated in challenges to statutes in Arizona and other states, said that “in many respects, this is a defining moment for the court on whether a historic line will be breached.”

“Will immigration law continue to be governed by national interest,” he said, “or will the court allow every state and locality to intrude in immigration policy and assert local biases and prejudices?”

NewsTaco will be on it, as always.