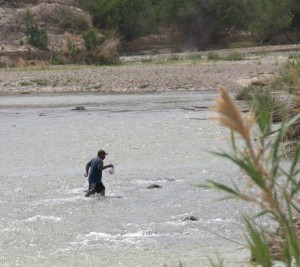 Once upon a time, I believed what my first grade teacher told me.  I thought I was the descendant of a pilgrim. I took her word for it. I thought I had more in common with the guys with the belt buckle hats rather than the guys with with feather in theirs. They even received the lion’s share of the lines during the Thanksgiving play.

My teacher at the time told us that pilgrims were people from another country who came to this land in order to make a better life for themselves and their families. There I was in my Le Tigre shirt and Payless shoes, looking at a globe wondering what ocean my mom and dad crossed with their turkeys and belt buckle hats. My basic knowledge of geography told me they crossed the Rio Grande, but that was only because my dad told me that he crossed across a big river with his shoes around his neck – and the Mississippi River did not seem right.

I remember bringing my cornucopia project home, and my mom looking at it like it needed to be put out of its misery. She did not know whether to make heads or tails out of it. She was further puzzled by my assumptions that she used to make cornucopias when she was my age at her presumed pilgrim school. I was so ignorant about her experience as a “pilgrim”, I actually thought she grew up baking pumpkin pies with Native Americans.

My mom then told me the story of how she first came to the United States. There was a Niña, and a Pinta, as well as a Maria, but she was no Santa – and instead of a Mayflower, they had a Dodge Challenger. My mom and her friend met with a coyote who was supposed to get them across the line and into the currently occupied Mexican Metropolis known as Los Angeles. Unfortunately, my mother’s weakest suit was always sarcasm. So when she asked the coyote how they would get past immigration officials, he said they would be traveling by plane – my mother failed to read said sarcasm in his travel plans. Thinking she would be flying, she wanted her first flight to be memorable. She bought a whole new outfit: white pants and white high heels to match. Needless to say it was memorable; she ruined her new outfit as she fought off the seedy underbelly of nature.

When she finally got to this side of America she didn’t like anything. She didn’t like the food or the fact that everyone was free to do nothing. Back in Michoacán, she was free to roam the town to her heart’s content, but here she had to be indoors before the sun came down or risk becoming a victim. She wanted nothing more than to find a thousand dollar bill so she could return to Michoacán. She didn’t care too much for San Diego which was her twisted Plymouth Rock – denoting that she had made it. She was finally on the winning side and the only side that mattered. At the same time, she could not turn back. She already had a job waiting for her as a caretaker for an elderly lady battling cancer. She would end up staying in that job until the lady final succumbed to her illness, and then she returned back home disillusioned with the fact that she never found that fabled thousand dollar bill.  However that does not mean she never stopped looking.