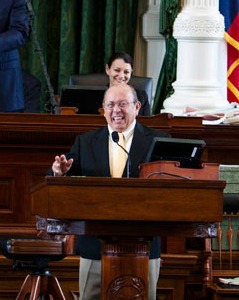 If you venture too far from South Texas or the mired halls of Texas’ state capitol politics you may not not run into too many people who’ve heard of Carlos Truan. But inside his home base the former state senator’s sometimes tender approach and sometimes hard-hewed politics were well known. Truan died Tuesday in his hometown, Corpus Christi, Texas. He was 76.

I first met Sen. Carlos Truan in the early 1980’s, covering the raucous Texas legislature. From the time of that first meeting to the last time I remember seeing or talking to him, he greeted me, or anyone else he met, with a wide, warm smile. But that smile guarded a toughness that he wielded in defense of his highest ideals.

He made his entrance into politics  in the late 1960’s, a time when schools were segregated in his hometown and the federal government had to intervene; a time of racial tensions and ethnic divides. He was tough, and he used his toughness in defense of the rights of Spanish-speaking school children to receive their education in their native language. In 1969 he authored and worked to pass the Texas Bilingual Education Act.

Throughout his long tenure in the Texas legislature he was known for the volume of legislation that he brought to the floor of the Senate.  He was tireless and energetic and by the time of this retirement was the Dean of the Texas Senate.

He leaves an enormous  legacy, and he will be missed.