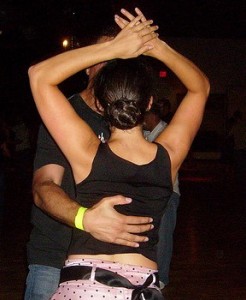 I imagine that most minorities who are self-aware have the occasional, or perhaps even perpetual, underlying fear of fulfilling racial stereotypes. It’s an anxiety that I’m still trying to unpack. I have recently identified this part of myself and am now sifting through the unpleasant muck. Part of me doesn’t give a fat rat’s butt what others think of me, but another sliver of me feels stifled by the white male gaze (not to be confused with the white male gays). …I feel unease as I drink a shot of tequila while wearing hoop earrings and a dress covered in psychedelic toucans.

I started thinking about all of this after a man commented on my article about Latinas for Women’s History Month. In his perplexing comment, he insisted that I was fulfilling stereotypes for identifying myself as “sassy” in my blog description. What I didn’t understand is why he thought sassiness was a negative trait. I’ve also never thought that this characteristic was specific to Latinas. My role models in sass have been very diverse— from my foul-mouthed aunt to Sofia from the “Golden Girls” to Shirley from “What’s Happening.” I have always admired the boldness of mouthy women. I could only hope to be that sharp-tongued one day. Needless to say, I found his comment to be irritating and reductive.

I realized, however, there were several stereotypes that I did, indeed, fulfill.

I can be loud. I don’t think this is solely because I’m Latina, but primarily stems from coming from a family in which everyone yells over one another. My laugh, a.k.a. my “bird call,” has also been known to startle strangers everywhere I go. There are moments that I am really yucking it up, flailing my hands about like a mime on stimulants, and then suddenly feel uncomfortable. Are the white folks looking at me all mean-like and classifying me as just another loud Mexican? Do they want to call INS to get me out of this bar? Why should I even care? What about loud white people? Do they get a free pass because they are not “genetically predisposed” to boisterousness?

My sense of style is fairly flamboyant. Plaster a bunch of birds or hamburgers (or both) on a dress, and I will likely buy it, maybe I’ll pin some feathers to it. I like leopard print. I like colors so loud they may permanently damage your retinas. I don’t know if this is because I’m Latina, because I’m an artist, or both. But lordy, I love outfits that would put Mimi Bobeck to shame. I also prefer clothes that are form-fitting since I am very comfortable with my non-emaciated body. But sometimes I do wonder if people look at and think of Carmen Miranda.

I will admit that I am feisty, fiery, fervid, or whatever heat adjective you want to use. I am a fairly reasonable person, but there are certain injustices that will undoubtedly get me all worked up into a frenzy, particularly instances of racism, sexism, or classism. When I am angry, my working class Ciceronian heritage does make a memorable appearance. Somehow, I suddenly fail to properly pronounce words (oh hells nah! mothafucka! why you gotta be so whaaaack?!) and my neck gets all jivey and attitudinal. When I was younger, I would try to erase where I come from, but as I grow older and care less of what others think, I realize I can’t. I am from Cicero, son!!

And regardless of its different forms of manifestation, isn’t so much of our anger valid? This stereotype is such a burden to both Latinas and black women, particularly because of how we’re portrayed in the media. But why the hell shouldn’t we be angry? There are terrible things happening in our communities. Don’t we have the right to be utterly pissed without the world dismissing it as on of our savage-like characteristics?

I think that what makes this anxiety so frustrating is that so much of these stereotypes are a result of TV and film. According to Hollywood, we are simply sexy spicy maids or some white dude’s hot girlfriend. Unfortunately, that is the only lens through which so many people see us. Sure, I admit that I fulfill stereotypes, but I also defy many. I am a complex, nuanced person. I’m not simply loud, flamboyant, and angry. I am an endless string of adjectives that have nothing to do with my ethnicity or race. I am composed of contradictions and paradoxes. One day I might be talking about Chaucer whilst eating Flamin’ Hots until my fingers are stained red. One day I might recite my poetry in a tight animal print dress. I might want to “pegar un grito” while listening to Leonard Cohen. See, I am American. I am a person.