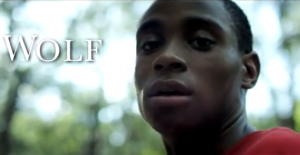 Austin, Texas — “Wolf” is the latest film and the first feature length film by Ya’Ke Smith, which premiered at South by Southwest. The film deals with the particularly deep subject of child molestation, and the aftermath of what happens when to the victim and his family when the victim falls in love with his abuser.

The film stars newcomer Jordan Cooper as the young boy who is molested by Bishop Anderson, played by Eugene Lee. The movie cuts pretty deep because it tries to develop the character that most movies forget — which is the human side or soul of the monster. The family deals with the guilt, especially the father who feels as if he is to blame, because somewhere along the line he became a provider and lost sight of being a father.

What works: This is a great effort by Smith because this is a story no one else is telling. What helps his cause the most is the fact that there is an original spin on a story that can be told, but for some reason it is muddled in other capable hands. Most films would feature a showdown between the abuser and the abused — that would be cliché.

That kind of thing is more re-threaded than a tear rolling down the cheek. This movie works because this movie pulls out and creates and formulates the characters. You get to see how the molestation affects the young man, his parents, the abuser, the church and everyone that crosses their path.

What does not work: This film has a couple of loose angles. I understand that abuse works as a cycle, but when the young man acts on certain impulses, there is no follow-through by his intended victim. There is no follow-up on the father’s final interaction with Bishop Anderson. There is a scene where Bishop Anderson receives a baptism through fire and faces the things he has done to the boys, but that scene is sort of disconnected.

Audience reaction: The audience displayed feelings of empathy for the story. There were some uncomfortable laughs during the screening of the film. I did not know if the movie intended for certain scenes to be comedic, but we laughed nonetheless. The theme of the movie is a heavy one, and I think the movie did a good job at not patronizing the subject matter.

I can recommend this movie, because it is a good effort by Mr. Smith. It is worth seeing because the positives outweigh the negatives. I will give them credit for trying to humanize a monster that cannot help himself when he is confronted by his urges. This film has an eerie similarity to the 2006 film “Deliver Us From Evil” about the Catholic Church shuffling pedophile priests. That film tried to show us the wolf in sheep’s clothing that went on preying on children. This movie warns you that the wolf itself might be closer than you would likely expect.