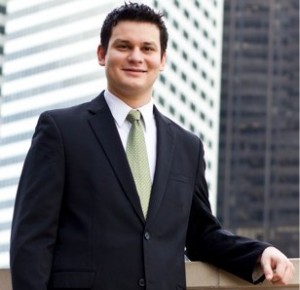 Joseph Carlos Madden, 28, is running for a seat in the Texas legislature. Originally from Houston, he already directs the Legislative Study Group and is the Chief of Staff for Rep. Garnet Coleman. As a young man, he’s one of the emerging leaders in Texas that will oversee the demographic changes that will transform our state.

NewsTaco had the opportunity to interview Madden recently, see his answers below.

NewsTaco: Please describe your district, what makes it unique?

Joseph Carlos Madden: Located in southwest Houston, it’s a very multicultural district.  Its about 50% Hispanic, and the other 50% is mix of African-American, Asian-American and Anglo.  I love it.  Where I live now, I can walk down the street and get Shawarma, Jerk Chicken or visit anyone of hundreds of taquerias. It’s a representative slice of the city.  And it truly reflects the face of Houston and the future of our country.

NT: What are your specific policy proposals for the district?

First and foremost, education. For me personally, it’s an important issue. My grandmother was born in Fort Worth and at one year old moved back to México; during her 18 years in Guanajuato, she had one year of formal education. She came back to the U.S. and worked as seamstress in Houston, raised six children and they worked their way through school.  I’m the first person in my family to graduate from college, so I know the value of an education and I know the value of good public schools and universities.

We need to ensure the funding is there.  The legislature during this most recent session cut $4 billion dollars from public schools. In 2003 they deregulated college tuition, and rates have skyrocketed since. Our schools are unable to deliver the services they are constitutionally obligated to do. In the Houston Independent School District, they have had to apply for waivers to raise the class size ratio; I would work hard to turn back those cuts in education and make sure our teachers have the resources they need.

Secondly, healthcare and jobs are a big issue to me, and to me, they really go hand in hand. If you got a good job you have good healthcare. We have 6 million uninsured Texans.  In 2014 we are supposed to implement the Affordable Care Act which means we need to enroll 1 to 2 million people in Medicaid; this past session, the legislature didn’t make any progress in implementing the act.

Finally, safe neighborhoods are very important.  There is gang violence in my district.  There are issues with graffiti.  If we properly invest and keep kids in school, that will go along way.

NT: You mentioned some people you worked with, but who else do you look to as a role model in leadership?

Locally, from Houston I look to Representative Jessica Farrar.  She is the first Latina to head House Democratic Committee and the Texas House Democratic Caucus. Having her at the helm is important, because it provides a unique vision and viewpoint that has not been there before. It takes a lot of courage to stand up to bad legislation, and she has been the person willing to do so. Nationally, I look to President Obama, he has set out a vision for this country. And Representative Coleman is my boss, but he always says, “If it is worth doing it is not going to be easy.” And I’ve taken that advice to heart in my current run.

NT: As a young person who could be doing many other things with his life, why run for office?

I was born in Southwest Memorial Hospital in the district. I learned from my grandmother that it is important to be involved in public service. I would go with her to the polls on Election Day. When I turned 18, I would go pick her up and we would go vote together. Through her I learned the value of hard work. I was a National Hispanic Merit Scholar, and while at the University of Texas I would walk over to the Capitol asking if any office had an unpaid internship. Since then I worked my way up and been involved in the process and play a roll in almost every bill that has been passed, both good and bad.