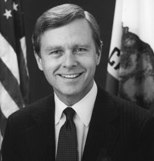 Adding Wilson to the fold, in addition to SB 1070 author Kris Kobach as an unpaid advisor, means Romney’s anti-immigrant aligns with the most right-wing politicians in the country’s recent history.