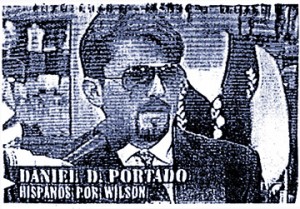 Although Mitt Romney has lately been in the news for promoting self-deportation, there is someone who beat him to the concept back in the 1990s — Daniel D. Portado. (It was a satirical movement, listen here to Act 3.)

The self-proclaimed “original self-deportationist,” encouraged others to follow his example and self-deport during California’s brush with anti-immigration legislation in the 1990s and Proposition 187. With the group HALTO — Hispanics Against Liberal Take Over — the group also sought to outlaw the Macarena and Linda Ronstadt’s music

In this current round of self-deportation, real groups have sprung up to actually promote self-deportation. And Romney’s rhetoric has actually been taken seriously in some politically conservative circles. Because this is not a necessarily new issue, despite that almost 20 years have passed, we interviewed Daniel D. Portado (a project of Lalo Alcaraz) about self-deportation and here’s what he said.

NewsTaco: Rumor has it that you are the original self deportation asked, is that true?

Daniel D. Portado: Yes. I clearly invented self-deportation in 1994 during the wonderful Proposition 187 era in California. I founded the group “Hispanics For Wilson”, a GOP support group of Governor Pete Wilson. Wilson correctly wanted to chase all the illegals out of California after they were done mowing our lawns, but before payday.

Our first event was the 5K Border Fun Run, where we issued a press release calling for illegal registrants to sign up for a one way 5K run over the border and into Mexico. We even offered free running shoes for each participant willing to self deport.

Later we appeared on the Telemundo program “Sevcec” on an immigration-themed program which aired in 22 countries on election eve. It was a satellite broadcast hooked up from Los Angeles to Miami, where several pro-immigrant babosos sat on a panel with several anti-immigrant overweight Cuban attorneys.

On this program I called for the deportation of Linda Rondstadt, whose bad ranchera cover music was attracting too many Mexican illegals to America. Also I demanded that Mexican food be declared a “biological weapon.”

NT: Why is self-deportation important?

DDP: We have to get rid of all these illegals crowding our country to make room for Americans. Look at how fat they are getting! We need much free space around the girthy Americans, go to any Walmart and see for yourself. I can barely get through the snack aisle, it’s like Jungle Safari — the part with the hippos.

Self-deportation celebrates the American spirit of stick-to-it-ness, and get-out-of-here-ness. Americans are frankly too lazy to get up off the couch to chase the illegals out, so why can’t they just do it for us?

NT: Have you spoken to the Romney camp about self-deportation?

DDP: Yes, I went to Camp Mormonhead for a hunting trip, I mentioned self-deportation to him, and the rest is history.

NT: How does your definition of self deportation differ from that of Romney’s?

DDP: Mitt Romney hopes immigrants will eventually self-deport back to their respective countries. I, on the other hand, demand that illegal immigrants self-deport immediately! And as to where they should go, I would send the Chinese to Mexico, I really don’t care.

NT: Will you endorse him for president?

DDP: Of course, as soon as the check clears.

NT: Take us through a day in the life of a typical self-deportationist.

DDP: Well, I wake up in the morning, pack my bags and then self-deport. Unfortunately, I love America sooo much, I usually sneak back in to the U.S. by lunchtime, and get to work backing whichever Republican candidate I am working for. I also lobby for anti-immigrant laws all over the South and in the Alabama of the West — Arizona.

NT: Do you hate yourself?

DDP: I hate illegals. And yes, I do not have my papers.

NT:  Do you have any other issues besides this one? What about English only?

DDP: Yes, I think all illegals should speak English only while they are in Mexico, just to make their lives even harder once they leave the U.S.