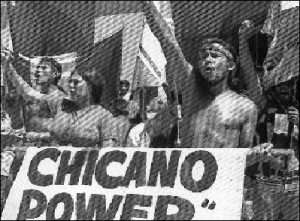 On August 29, 1970 in East Los Angeles, a group of Chicanos got together in order to discuss how to best oppose the Vietnam War; included in the mix were Brown Berets, walkout leaders, and an assorted mix of activists. The National Chicano Moratorium Committee put on the event, which would come to be known as the Chicano Moratorium, in what was then Laguna Park.

What was meant to be a peaceful protest to address real and salient issues unfortunately turned into a riot after police said they chased robbery suspects into the park, and began harassing protestors. When the dust settled, four people were dead, including journalist Rubén Salazar.

Now this historic event will get the literary treatment when students from Monterey Continuation High School in East Los Angeles present the plays they wrote based on interviews with four participants in the moratorium.  The staged version of the plays will be presented on January 25 and 26 in Los Angeles and be titled “2012 Meets 1970.”

According to a report from Latino LA, those interviewed by the students include:  organizer Rosalio Muñoz, Consuelo Flores, artist Vibiana Aparicio-Chamberlin and film/tv director Jesus Treviño. If you would like to attend the free plays:

Spread the word! Our weekly Bien Hecho segment, highlights the good deeds and achievements of Latinos across the U.S. If you feel that someone you know is deserving of recognition, let us know at tips@newstaco.com.