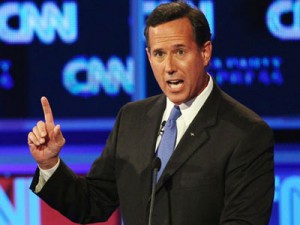 Despite enjoying a sudden emergence and strong second-place finish in Tuesday’s Iowa Republican caucuses, experts believe Rick Santorum would be unable to secure the Latino vote in 2012.

Although he has been careful to play up his Catholic, pro-family values and immigrant parents angle, his hard stance on illegal immigration is listed as the top reason for Santorum’s likely inability to capture the Latino swing vote.

In September during a Republican debate, Santorum called Rick Perry “soft on illegal immigration” for supporting in-state tuition for undocumented immigrants and refusing to build a border fence along the U.S.-Mexico border, both points that have proved important to Latinos in the U.S.

A recent Pew Hispanic Center report found that “84% of Latinos favor granting in-state tuition to unauthorized immigrants” and an overwhelming 91% are in favor of the DREAM Act.

While Santorum often refers to the beauty of the “American melting pot,” he has been unwavering in his belief of the need for the U.S. to take drastic measures to strengthen border security, and has been ambiguous on his plans for the 11 million undocumented immigrants already in the country, saying “we’ll have that discussion [after]” the border is secured.

Observers also point to Santorum’s word fumble, referring to Latino voters as the “illegal vote” in a September debate, as not helping his image within the Latino community.

“What Gov. Perry has done is he provided in-state tuition for illegal immigrants, maybe that was an attempt to attract illegal vote – I mean Latino – voters,” said Santorum in the debate.