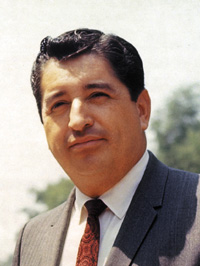 Rubén Salazar was born in 1928 in Ciudad Juárez,, Mexico. Through his journalism career in El Paso and later Los Angeles, Salazar became the first Mexican-American to cover the Chicano community for a mainstream media outlet.

He was killed in 1970 when a Los Angeles County sheriff’s deputy fired a tear gas canister and it hit Salazar in the head while he was seated at a bar during the 1970 National Chicano Moratorium March against the Vietnam War.

After a short stint in the army and graduating from college, Salazar got his start as a journalist at the now-defunct El Paso Herald-Post. He later went on to work for several California papers before landing at the Los Angeles Times in 1959. After serving as a foreign correspondent in Central America, Salazar returned to the U.S. to cover the Mexican-American community and East Los Angeles, an area largely ignored except for crime stories. His stories were often critical of police treatment of Chicanos, especially after he clashed with them during the L.A. Walkouts.

Salazar continued his work at Spanish-language station KMEX, where he investigated instances of police brutality against Chicano protesters. After covering the Chicano Moratorium March, Salazar and a fellow reporter ducked into the Silver Dollar Bar and Cafe after the roughly 20,000 protesters clashed with sheriff’s deputies.

One deputy, defying police protocol, fired a tear gas canister into the bar and struck and killed Salazar. Since then, many questions have surrounded Salazar’s death and made him a sort of rallying point for charges of excessive force used by Los Angeles law enforcement against civilians. The many honors bestowed upon Salazar after his death include being featured in a 2007 series by the U.S. postal service of five prominent American journalists.