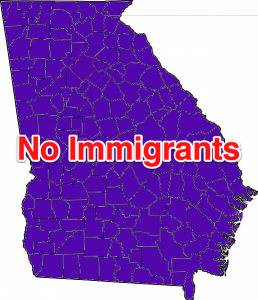 The Agricultural Commissioner of Georgia, Gary Black, released a report this week documenting the effect of HB 87 on Georgia’s agricultural economy. The report notes that the state’s agricultural industry is the “top economic driver.” Specifically, this amounts to $68 billion of Georgia’s total $786.5 billion.

I don’t think any of us are really surprised with this report says, namely that this huge economic engine for the state of Georgia has suffered because of that state’s immigration law targeting Latino ag workers. Various reasons are given for these losses, which affected 1 out of 4 of the state’s agriculture workers, but ultimately these changes came about because of the law.

The “Report on Agriculture Labor” had one gaping hole in its gathering of information: no one talked to the actual agriculture workers. Rather, the report interviewed “a random sample of individuals throughout the agriculture industry,” who gave answers to survey questions, and their comments are reproduced within the report.

Some of the report’s principal findings include:

What was very interesting in the report are comments from the respondents: