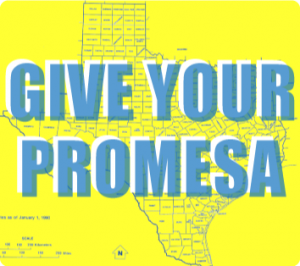 By Anthony Gutierrez and Rebecca Acuña, the Texas Democratic Party

Our community is under attack by right-wing extremists. We’re willing to bet, albeit not $10,000, that you’ve had enough of the hostility and hateful rhetoric coming from the Republican Party towards Latinos. But you have the power to stop these constant attacks on our families.

The Texas Democratic Party is proud to launch the Promesa Project to reach out to our fellow Latinos and ask them to take the reins to change our state. Based on simple math, we know we have the power to change the political landscape in Texas.

There are 3.8 million eligible Latino voters in Texas, and one out of every four eligible voters in Texas is Latino. We know that on every issue that’s important to Latinos, Democrats are better. We also know that there’s no one better to carry out that message than young Latinos themselves.

Research has shown that young Latinos, many of whom are the first in their families to attend college, are increasingly the trusted sources of political information in their families and social circles. A study earlier this year also found that the Internet had surpassed television as the main sources of news for people under 30.

The Promesa Project is an innovative program that will use a combination of online and grassroots techniques to recruit young Latinos as the Party’s messengers to their families and social networks. On PromesaProject.com, individuals will be able to give us their “promesa” that they will talk to their family and friends about voting Democratic.

After signing up, you’ll have access to a member section, email updates, sneak previews of new videos, organizing tips and talking points. We’ll offer a space for feedback so that you can tell us what you like, what you don’t, and who you’ve been talking to.

We’ll also put field organizers on college campuses to host events and collect information from others who want to see a change in Texas. We will use the information we get from you in our get-out-the-vote efforts. Because in the end, no matter how many people watch a youtube video, or “like” something on Facebook, it’s about getting our family and friends to the polls.

The Promesa Project will feature our prominent Latino elected officials and party leaders. Here in Texas, there are 668 Hispanic Democratic elected officials, and just 60 Hispanic Republicans. That’s because there is no comparison between our Democratic values and the misguided Republican proposals which adversely affect our community.

A simple recap of the last legislative session proves our point.

Democrats tried to send more money to neighborhood schools, lower college tuition, and increase financial assistance for deserving students. At the same time, Republicans in Texas decimated public education, caused teacher lay-offs, attempted to end birth-right citizenship, enact Arizona-style immigration legislation and repeal the Texas DREAM Act. This is the type of information that we’ll be featuring, and the types of stories you should be sharing with your family and friends.

There’s no one better to get our community engaged and voting than you.

We don’t pretend that it’s going to be easy; creating systemic change never is. But this is the start. We’re asking you to take the reins and lead the way to a better Texas.