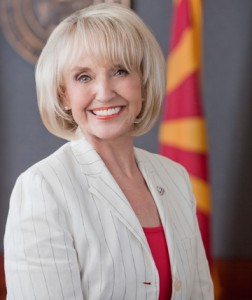 The group behind the historic recall of SB 1070 sponsor Russell Pearce is currently gathering feedback from voters on whether a recall of AZ Governor Jan Brewer should be attempted in 2012.

Citizens for a Better Arizona announced they would support a recall effort if at least 5,000 voters sign up to volunteer as petition circulators on their website.  A successful recall of the governor, who supported the harsh anti-immigrant law and which has inspired copycat laws in Alabama, South Carolina, and Georgia, would require more than 432,000 valid signatures.

“It’s not what we’re going to do. What are they going to do?” said Randy Parraz, President of Citizens for a Better Arizona. “You can’t just recall a governor because you don’t like her.”

The group began asking for volunteers the day Brewer signed Pearce’s recall documents, and it is moving forward during a time of heightened tension in AZ politics and throughout the U.S.

Immigration is not the only issue plaguing Brewer.  The governor is currently facing criticism over her attempted removal of the chairwoman of the Arizona Independent Redistricting Commission, Colleen Mathis, over the state’s new congressional maps.   The Arizona State Supreme Court invalidated Brewer’s actions when it reinstated Mathis last week, saying the governor did not have sufficient cause to remove her.

Petitions are also currently circulating in Wisconsin to stage a recall against Gov. Scott Walker.

“Our job is to listen to the citizens of Arizona,” said Parraz.