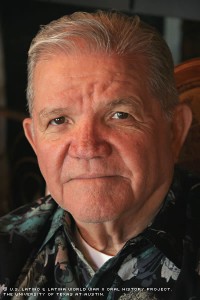 The legal battle that’s unfolding in a Federal courtroom in San Antonio, Texas, could well have repercussions across the country. News Taco has reported on the trial and how Texas’ Mexican American Legislative Caucus (MALC) brought the suit to fight the electoral districts drawn by the Republican-led Texas legislature.

A key part of the testimony in that trial has come from state legislators who have provided a first hand perspective about how redistricting can be used to dilute the power and opportunities of Latino voters. One testimony in particular was especially poignant, insightful and steeped in history. Former state senator Joe Bernal came to office at a time when having Latinos in the state house in Austin was an anomaly. In his time in office he battled in favor of bilingual education, voting rights, and language rights among many, many other things. Senator Bernal took the stand in the federal case against the Republican redistricting last week.  And while his words were useful for the trial proceedings I see them in a very different light.

Here’s an excerpt, as reported in a MALC newsletter:

When asked about segregation when he was a young person, Senator Bernal replied, “I worked at Guadalupe Community Center with kids for some time during the time that I was going to college. And I guess the worst experience that I ever had was taking some kids to Landa Park in New Braunfels and walking into a restaurant. And all these kids, I’d say about 20 of them that I was taking, asked me, are we being discriminated? …we couldn’t eat in the front of the restaurant…they offered us food in the back.”

Senator Bernal is one of the best sources of knowledge of the way things used to be, not so long ago, in U.S. Latino politics. He gave the panel of judges a historical perspective of  injustice, inequality, poll taxes, power dilution, and blatant discrimination. I think we’ve tended to lose that historic perspective – mainly because it’s seldom remembered or because our children don’t read about it in their history books, or we as parents don’t tell those stories to our children.

That’s what I find especially important about this testimony. It is history from a man who lived it. It’s also a great read. I recommend it because what happened in San Antonio more than 50 years ago mirrored what was happening to Latinos across the country. Take some time, give it a read.