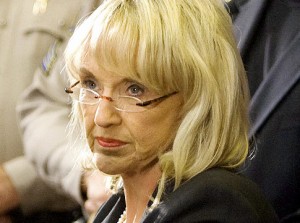 Arizona Gov. Jan Brewer appealed to the Supreme Court Wednesday to overturn the ruling that put a hold on key provisions of the state’s immigration law.

The law, which requires state and local police officers to check immigration status during routine stops, has been the center of an on-going debate between the state and federal government.

The Obama administration claims Arizona is overstepping its authority, and says the law is unconstitutional because it conflicts with federal immigration law.  Arizona says the federal government has not done enough to enforce border security.

“Arizona bears the brunt of the problems caused by illegal immigration [and] is the gateway to nearly half of the nation’s illegal border crossings,” Paul Clement, former Solicitor General for the state, said following the appeal.

The Obama administration won two previous battles over the anti-immigration law in Phoenix and from the Ninth Circuit court of appeals, which put parts of the Arizona immigration law on hold.

Immigrant rights advocates also challenged the law in a Phoenix court claiming that it encourages racial profiling and is anti-Latino.

If the Supreme Court agrees to hear the appeal, justices are likely to hear the case in the winter and hand down a ruling in the spring, adding fuel to the immigration debate as the presidential election campaign season kicks into full swing.

“The governor had put herself in a political position where she had to file this appeal. But she has lost in the district court and in the court of appeals, and I don’t think dragging it out will make for a different result,” Omar Jadwat, a lawyer for the American Civil Liberties Union said.