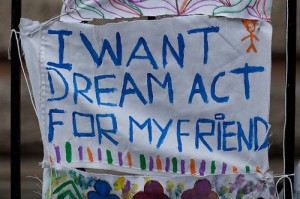 The Illinois DREAM Act, which will help undocumented students in the state pay for college, was signed into law by Governor Pat Quinn on Monday.

The law will create a “DREAM Fund” supported by private donors—not taxpayers, that will hold funds for grants and scholarships for students.   Quinn has pledged $1000 of his own money to the fund.

Chicago Mayor Rahm Emanuel was present for the signing and expressed his support for the legislation.

“Immigrants are a driving force in our city’s cultural and economic life, and opening the way for all Chicago students to earn an excellent higher education will make our city even stronger,” Emanuel said. “I am proud that families and students across Illinois will now have a better shot at the American Dream — which starts with a great education.”

The law takes its name from the federal legislation that has failed to pass in Congress since it was first introduced a decade ago.  Unlike the federal version, this law does not create a path to citizenship for undocumented students.

Under the law, counselors will be encouraged to undergo training that will better equip them to help undocumented students pursue a college education such.

Arianna Salgado is one of these students.  She was told she couldn’t go to college because she didn’t qualify for federal financial aid by a counselor.

“Now I know that our high school and college counselors acknowledge us and know that we exist and will be able to inform us more,” Salgado stated at the ceremony to a standing ovation.  “We deserve the same opportunities to continue with our higher education because we have the same dedication and commitment as our peers.”

Rep. Luis Gutierrez (D-IL), an ardent supporter of the DREAM Act and whose most recent protest over the broken immigration system got him arrested outside of the White House just last week, was unable to attend the signing due to the debt ceiling issue in Washington but issued a statement.

“Illinois has been and continues to be visionary in its approach to including immigrants into the fabric of our communities. The Illinois DREAM Act begins to deal with the reality that we have about a million young people nationally who came here at a young age, were raised in the U.S., and do not have legal immigration status, yet they have aspirations for higher education, service, and contributing to the success of this country, the only country they have ever known” said Rep. Guitierrez in a statement.

California also recently passed its version of the DREAM Act.