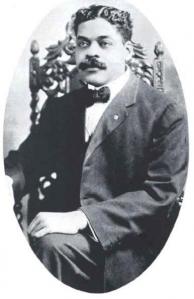 Arturo Alfonso Schomburg was a Puerto Rican historian, writer, and activist in the United States who researched and raised awareness of the great contributions that Afro-Latin Americans and Afro-Americans have made to society. Schomburg  was born in the town of Santurce, Puerto Rico  to María Josefa, a freeborn black midwife and Carlos Féderico Schomburg, a merchant of German heritage.

Our weekly segment, “Bien Hecho,” highlights the good deeds and achievements of Latinos across the U.S. If you feel that someone you know is deserving of recognition, let us know at tips@newstaco.com.

During grade school one of Schomburg’s teachers claimed that blacks had no history, heroes or accomplishments. Inspired to prove the teacher wrong, Schomburg determined that he would find and document the accomplishments of Africans on their own continent and in the diaspora, including Afro-Latinos, such as Jose Campeche, and later Afro-Americans.

Schomburg immigrated to New York in 1891 and settled in the Harlem section of Manhattan. He continued his studies to untangle the African thread of history in the fabric of the Americas.

Over the years, he collected literature, art, slave narratives, and other materials of African history, which was purchased to become the basis of the Arthur Schomburg Center for Research in Black Culture, named in his honor, at the New York Public Library in the 135th Street Branch of the Library.

Arturo Alfonso Schomburg’s work served as an inspiration to Puerto Ricans, Latinos and Afro-Americans alike. The power of knowing about the great contribution that Afro-Latin Americans and Afro-Americans have made to society, helped continuing work and future generations in the Civil rights movement. We leave you with a quote that invites us all to reflect and, wherever applicable, take action and heed Schomburg’s counsel.

The American Negro must rebuild his past in order to make his future. Though it is orthodox to think of America as the one country where it is unnecessary to have a past, what is a luxury for the nation as a whole becomes a prime social necessity for the Negro. For him, a group tradition must supply compensation for persecution, and pride of race the antidote for prejudice. History must restore what slavery took away, for it is the social damage of slavery that the present generation must repair and offset.