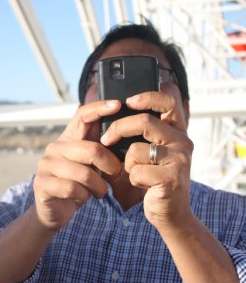 I’m as Hispanic as the Latino next door – so whether I’m one or the other is a matter of definition. That said, it’s hard to  pinpoint one meaning that everyone can agree on. Whenever I’m asked if I’m Latino, Chicano, Hispanic, Mexican-American or whatever I say yes. And then I’ll hold the silence that follows.

When I’m in a more practical mood I’ll ask for definitions of each, and depending on the definition I’ll choose the one that fits me the best. Mostly though, I choose to not get involved in a discussion that never ends. It ranks, for me, equal to the discussion of the differences between men and women – like watching my Beagle chase his tail (some women might argue that if he were a she he’d know better than to chase his own tail).

The point is that you are what you define yourself to be, and when it comes to Latino versus Hispanic cada cabeza es un mundo. At News Taco the easy consensus was Latino.

First, for practical reasons: We have to chose one or the other, it makes no sense to make random use of both.

We will, when the situation applies, use the term Hispanic when it’s part of a quote. If someone we’re quoting says Hispanic, we’re not going to change it to Latino.

Second, because we’re kinda’ nonconformists.  I was a young reporter in the early 1980’s when the government and the marketers started calling us Hispanic – one to group us into a pile of their definition and the other to fabricate a market that could be sold and sold to. No one ever asked, and I can see how impractical that would have been. A decision was made somewhere and I woke up one day to find I was Hispanic.

Since then there’s been a slew of push-back arguments against the term: Hispanic implies being from Spain, and we’re not; I don’t like being defined by a term that has the word “panic” in it; it’s an imposed definition; what does it mean anyway?

I once heard someone say that Mexico was not Latin America, and I almost choked on my Cheetos. It was the watershed moment when I decided that I would no longer get involved in that question. And here I am, writing about it.

So I prefer the term Latino, because it fits my idea of who I am, a member of the vast, varied, huge, rich, growing and wondrous Latin American culture.  But I’m also American; part of the wonderful American fabric as well, equally at home in both. The government and the marketers would have me say I’m Hispanic because it’s easier for them if I do that. So if asked , are you Hispanic,  I say “sure.” It’s not a matter of contention for me as I know it is for many people. I just can’t get excited over it. Hispanic doesn’t fit well with me, Latino does, and that’s that.

When we came together to form News Taco I found kindred spirits who felt the same, so it was a non-issue. We use the term Latino because we feel that it defines us better than other terms. We could say Mexican, or variations thereof: of Mexican descent, Mexican-American, etc…, but that would exclude people from many other nationalities and ancestries. We could say American, but that  would only increase the confusion – we’re not talking about all Americans, only a swath of the American family that can trace it’s roots to Latin America. So we choose Latino, although I like to think it chose me.

A non-Latino once asked why I felt so special because I was Hispanic. I said it wasn’t my idea. Whoever created this world thought me up as an American male, of Mexican ancestry, living in South Texas. If you have a problem with that, you need to take it up with the one who conjured me. And by the way, I’m Latino.