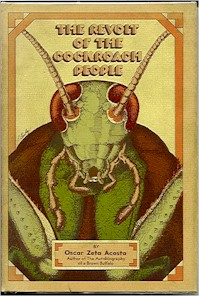 I remember the first time I read Oscar Zeta Acosta’s super-Chicano novel, “The Revolt Of The Cockroach People.” I was in eighth grade, during silent sustained reading, and happened to come upon a rather risqué sexual scene in the book. I later castigated my history professor father for giving me such tripe to read; although after my upteenth reading of the book, I understand that, despite the drugs and sex in it, this work has a lot of value.

Here we are in 2011 and we continue to deal with many of the same issues Acosta wrote about in his book. Unequal access to education, unequal representation under the law, being ignored by public officials, poverty, and much more. As I read the book this time around, I found myself shaking my head, unable to believe that since the book’s first publication in 1973, so little had seemingly changed.

What was it all for? But then I caught myself. Here I am, a Latina who attended Stanford University and is currently editor of a top Latino news website. Things have changed, haven’t they?

And although the only women in Acosta’s book are the ones who are of sexual interest to him, I know that when he and others were in Los Angeles, Denver, Crystal City, Tucson, Delano, Chicago, New York or wherever else in the 1970s — they were fighting for me, too.

I recently had the privilege to speak to someone who was in Los Angeles, coming up in his career, when all of these events were going on. The Chicano Moratorium. The inquest into the death of Rubén Salazar. The arrests of Chicano activists. People were scared and people were angry, he told me, but there was a sense of unity and justice. All these years later, he’s made a successful career for himself — as many, including News Taco’s Carlos Guerra did post-1970s. So yes Sara, it was all for something.

At the end of the book, and before Acosta’s mysterious disappearance into the ether, he tells the reader that he was just one of a bunch of cockroaches that helped start a revolution. You see, he used the term “cockroaches” to describe people stepped on by others in the country at the time. “Somebody” has to answer for all the injustice he witnessed, he said, but it would no longer be him.

Somebody. As I read that, DREAMers and activists and writers and academics and mothers and fathers and immigrants that I’ve met through the course of my life started to pop into my head. We’re all “somebody,” each and every one of us, not just because we exist but because we exist to make life better for the people we love — for the country we love. By the time I polished off the book, I felt hopeful, coming up to the 2012 election and the final Census results, I realized that “somebody” could also be me.