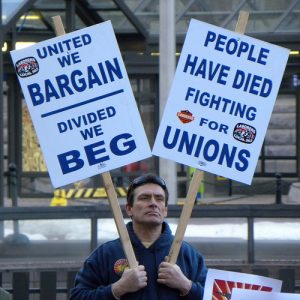 Workers all over the country are rising up by the thousands to defend the basic American right to collectively bargain. We can fight the anti-union ambush in the states with worker solidarity among Latinos and all workers, but first we need to understand why we are fighting and what is at stake.

What is happening in Wisconsin and other states will shape the future of the middle class in the nation and the basic structure of workplace protections for working people, particularly for Latinos and all minorities.

We can no longer take these protections for granted. The minimum wage, paid sick leave, Social Security, Medicare and child labor laws are among the protections and benefits that workers in the labor movement helped secure for millions of Americans.  The 40-hour workweek (as opposed to 60, 70 or 80 hours) did not materialize from one day to the next; it was the subject of a hard-fought battle spearheaded by the labor movement for more than a century.  This arduous fight—led by hundreds of thousands of union activists who marched, fasted, lost their jobs and even, in some cases, their lives— won workers the now-standard eight-hour day.

We must defend these rights. Collective bargaining gives workers a way to negotiate with employers for higher wages, job security, and safer working conditions. The hallmarks of the American middle class—raised wages, retirement funds and paid vacation time—weren’t gifts from corporations to their workers. They were the result of collective bargaining.   Yes, collective bargaining, the same right that the Wisconsin Republicans, at the bidding of the billionaire Koch brothers, just yanked away from public workers despite massive and unprecedented public protests.

These measures target teachers’ aides, nursing assistants in public hospitals, road repair workers, sanitation workers and others who already labor in tough and low paying jobs. Gov. Walker and his cronies have stripped even these vulnerable workers of their basic right to negotiate for higher wages and better benefits.

Losing Wisconsin could mean losing the first line of defense that workers have when facing abuses. And those who will suffer the most are the workers who are already the most vulnerable in the nation: minorities.

For the Latino community this must be an issue of grave concern. Latinos face the highest rate of death on the job, and they have the lowest levels of pension coverage and health insurance. Latinos in low-wage jobs have their wages stolen from them by their employers more than any other group.

On the other hand, Latinos stand to benefit enormously from joining unions.  Latino union workers earn almost 51 percent more (in median weekly earnings) than their nonunion counterparts. They also have better health insurance and pension plans. Other workers of color also achieve similar gains the moment they join a union.

Wisconsin isn’t the only state where this struggle for bargaining rights is happening. Other states, including Ohio and Indiana, confront similar assaults that would limit the basic rights of public workers.

According to polls, a majority of Americans support these workers. That’s because most people, whatever their experience with a particular union may have been, understand that unions are central to having a healthy middle class. A recent report by the Center for American Progress demonstrates a correlation between the financial share of the nation’s income going to the middle class and the number of workers in unions. As our middle class erodes, the income gap between the richest and poorest Americans widens.

These recent attacks on organized labor are not new, but they are escalating as a result of unions’ weakened position. For several decades, there has been a decline in union membership among all demographic groups. Corporate lobbyists have succeeded in changing the way labor laws are applied and administered (To whose advantage? You get one guess). Current federal legislation gives employers the upper hand in using tactics (both legal and illegal) to prevent workers from organizing.

The share of workers represented by unions was relatively stable in the 1970s, but since the 1980s it has fallen rapidly. This decline has caused wages to stagnate and the quality of work to take a nosedive for all workers. Now, there is less pressure on non-union employers to raise wages and agree to better working conditions. Today, the richest 1 percent owns 34 percent of the country’s wealth. While the entire bottom 90 percent of Americans own a mere 29 percent of the nation’s wealth. To put this into perspective, if we examine the combined net worth of the Forbes 400 wealthiest Americans in 2007 and that of the poorest 50% of American households, we find that they are almost the same, $1.5 trillion for the former and $1.6 trillion for the latter. In 2009, the number of people in poverty was the highest it has been in more than half a century since poverty estimates were made available in 1959. This situation is shameful and we must fight back against measures that only exacerbate the problem.

Labor unions strengthen the economy, our tax base and help build the middle class by helping workers secure higher incomes, critical benefits and workplace protections.  Unions give workers a fighting chance in an unequal economy and collective bargaining strengthens America’s democratic process. The quality of life of everyone who earns a paycheck is at stake. If the courts back Walker and we lose Wisconsin, the next questions the Koch brothers could raise is: why do these workers have weekends when they could be working? Oh, and their children too.

Hector E. Sanchez is the executive director of The  Labor Council for Latin American Advancement (LCLAA). He has worked in education and non-profit organizations, and has over 10 years of policy, advocacy research and community outreach experience.