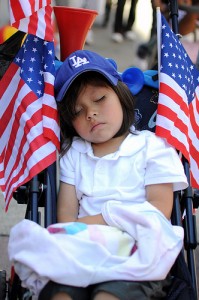 The Census numbers are out for California and there’re two big stories to talk about; first, that Latino children are now the majority in California, and second, that as Latinos grow in political strength their influence is moving away from the coast.
The fact that Latino kids are the majority is not surprsing, Forbes.com reports:

Kenneth Johnson, a professor of sociology at the University of New Hampshire, said that reflects a pattern seen elsewhere in the country where the number of non-Hispanic white children is falling because the white population is considerably older, leaving fewer white women in their childbearing years.
The loss is greater in California, he said, and the number of children in the state hardly grew at all.
The number of Hispanic children grew 17 percent. That means 51 percent of Californians under age 18 are now Latino.

The obvious implications are for public education and social services in a state that not only has huge budget shortfalls but has legislated mandates, generated by initiative and referendum, that basically hog-tie the government and the options it has for finding funding solutions.  The long term implications are better: a young and larger workforce in the coming years and a more pronounced political force that can use the very same initiative and referendum to make lasting change. USA Today quoted a California demographer:

The figures reflect a reality already seen in California’s public schools, where a majority of students are Hispanic, says Hans Johnson, demographer at the Public Policy Institute of California.”The future of California depends on the successful integration of immigrants and their children into our economy and society,” he says.

And as far as the power shift is concerned, the Los Angeles Times reports:

Political power will shift away from traditional strongholds such as Los Angeles and San Francisco and into the Inland Empire and Central Valley. Minorities, whose representation in the Legislature and the California congressional delegation has never matched their population numbers, could see increased opportunities to gain control of elected offices.
“The California state Legislature and the congressional delegation are about to look a lot more like California. You’re going to see districts that are much more likely to elect minority candidates and a huge shift from the coast inland,” said Dan Schnur, director of USC’s Unruh Institute of Politics.

Latinos in California are now closer to parity with non-Hispanic whites than they have ever been — 37.6% to 40.1%. And that population and power shift will no doubt spark redistricting madness as it has across the country. The difference in California is that the task of drawing the lines where one district ends and another begins has been taken away from the politicians. So while California state legislators and their funders are curled into the fetal position, having redistricting withdrawals, a supposedly non-partisan commission will bring out their crayons and tracing-paper and draw new lines (I’m sure they’re using some fancy mapping software, but it all boils down to the same thing). The next question to ask is how many of the Latinos that fueled the population increase are eligible voters, and how many of those are registered to vote?  The redistricting commission is expected to release the newly drawn districts in June of this year, after a series of public hearings in April and May.

What’s interesting about the overall population picture in California is that, as a whole, the state’s growth was slower than it has been in the past – the slowest since the Great Depression. The Census reports the growth rate at ten percent, lower than the thirteen percent rate of the 1990’s. The reason, some of the folks that study these things say, is that the recession seems to have taken some the luster out of the state. Again USA Today:

While the nation is emerging from a recession, California felt it early and is continuing to lag, economists say. That makes the state far less attractive to residents of other states who in previous decades may have longed to join the California dream.

“The biggest change is definitely the slowing down in our rate of growth and the almost total stop of people coming to California from other states,” says Douglas Johnson, a fellow at the Rose Institute of State and Local Government in Claremont.

The biggest story, though, is still to come when the districts are drawn and the balance of power in California goes into play.