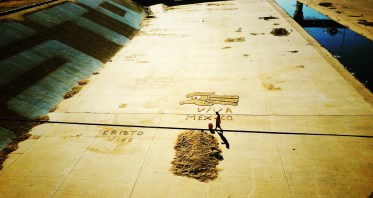 *It’s a true, tough question. Mexicans are incensed at the thought of a Trump wall. But, why are so many of them willing to risk their lives to leave? VL

I have no doubt that (yet another) wall between the United States and Mexico would be a disaster. The biggest reason: it would provide Mexico’s elite with some distracting issue to point to to avoid having to address all that has made it a country that people risk death to leave.

The other day I was in Tijuana working on another story about the deportees who have congregated in that city.

I was hanging out in the Zona Norte, a neighborhood right at the border where I suspect 90 percent of the residents have been deported. I was in a humble, cramped one-story apartment complex, where many men have rented cheap rooms – the kind of place that dots this neighborhood. (Btw, this neighborhood is a hundred yards from not one, but two walls separating the country.)

I was interviewing one of these guys, when another came to his door and said the police were there. After the interview, I went outside to the patio to find heavily armed police menacing the guys in the apartment. One had teeth clenched, right up in the face of one man whose hands were cuffed.

I don’t know the whole story here. There are a lot of good reasons why these guys were deported: DUIs, drug use, etc. Some may have been selling drugs. I don’t know. The neighborhood is full of problems, and I would understand a police officer’s frustration with it.

But I do know that to a man, every deportee I’ve interviewed has stories (plural) of cops beaten him, taking his money, insulting him for speaking English, for being a deportee, and in general using their power in a manner that would seem to have little to do with combating crime or drugs in the area. On the contrary, it does a lot to keep poor men down.

I suspect these men, while they were working in the United States and part of that workforce sending money home to Mexico, were applauded. Now they’re deported and it’s a different story.

What I saw that day was minor, really. But this minor experience gets to the bigger issue of what Mexico must do to become a place that people don’t want to leave.

Mexico is bereft of institutions that common Mexicans can have faith in. Mexico’s economy has been doing well, but the day prior I met two groups of people – one from Michoacan, the other from Guerrero – that had traveled up from Mexico’s interior to ask for political asylum, so scary was the violence that surrounded them.

So there’s two Mexico’s: one reflected in the (real) statistics of economic growth; the other in the (also very real) experience on the ground in many Mexican states of complete disintegration of the basic institutions of civil society.

I recently did a story for National Geographic about Ciudad Juarez and all that it did to reverse years of nightmarish violence: by investing in local infrastructure.

I have seen good Mexican cops, but there aren’t enough of them. Political parties have become the new dictatorship. City government is so lacking in funding and civil service that it – the most effective level of government in attacking poverty – is completely incompetent, and too often unaccountable. Meanwhile, Mexico seems always ready to shoot itself in the foot – to wit, the recent release of drug cartel leader and killer Rafael Caro Quintero, now marshaling forces to go to war with El Chapo Guzman in various parts of the country, including in Cd. Juarez.

(Read two related stories in the latest edition of America’s Quarterly with the views of Mexico’s central banker Agustin Carstens and its former ambassador to the U.S., Arturo Sarukahn.)

So if Mexico is inflamed at the demagoguery of one of our presidential candidates, I don’t blame it. That demagoguery – yet another wall along with it — poses real threats to the United States and its standing in the world. It would also poison relations between the two countries, thus removing an important lever with which the United States can push Mexico to change, and closing off the ways in which the countries currently and beneficially work together.

Mexico ought to strongly note its disapproval. Then it ought to turn inward and begin examining why for decades it has been a country so many poor people have risked death to leave.

This article was oroiginally publishe in DREAMLAND.

It’s the summer of 1998 and for five years over a hundred mangled and desecrated bodies have been found dumped in the Chihuahua desert outside of Juárez, México, just across the river from El Paso, Texas. The perpetrators of the ever-rising number of violent deaths target poor young women, terrifying inhabitants on both sides of the border.

El Paso native Ivon Villa has returned to her hometown to adopt the baby of Cecilia, a pregnant maquiladora worker in Juárez. When Cecilia turns up strangled and disemboweled in the desert, Ivon is thrown into the churning chaos of abuse and murder. Even as the rapes and killings of “girls from the south” continue—their tragic stories written in desert blood—a conspiracy covers up the crimes that implicate everyone from the Maquiladora Association to the Border Patrol.

When Ivon’s younger sister gets kidnapped in Juárez, Ivon knows that it’s up to her to find her sister, whatever it takes. Despite the sharp warnings she gets from family, friends, and nervous officials, Ivon’s investigation moves her deeper and deeper into the labyrinth of silence.