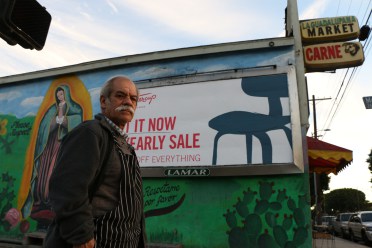 **Some reassuring news hidden behind Los Angeles murder stats. Context makes the difference in urban settings, along the border, anywhere that numbers are used to paint pictures. VL

It would have been easy to miss some stunning news a few days ago.

It came buried in the back pages of a December 30 LA Times article on how crime was rising. Rising across the board! First time since 2003! Yikes!

The real stunning story, though, was this:

The city will register only 280 homicides for all of 2015. That would seem sad, and for 280 victims and their families and friends, it most certainly is – I can say this as a reporter who has covered hundreds of murders in his career. I know how murder can destroy not just one life, but the lives of the surviving family as well.

To understand, however, why that number could actually be encouraging news, a remarkable event, you need the context. Here’s some:

Pitched as a 10 percent increase, 280 homicides is actually the city’s third lowest homicide figure since 2000 and part of a drop in crime that has been going on since roughly 2007. In fact, apart from 2013-2014, the city hasn’t had that few homicides since 1967, when L.A.’s population was a third smaller than it is today (roughly 2.4 million people then compared with 3.8 million today).

You’ll remember, perhaps, that in August there was a collective freak-out at the increase in homicides that month. I thought folks should have maintained some calm and context, and dealt with it seriously and professionally, which is what it appears LAPD proceeded to do. The rest of the year saw monthly homicide numbers fall again.

My guess is that in a heavily armed culture, and a very large city, we won’t see homicides dropping to, say, 200 a year. So it’s possible that we’re at about the lowest crime levels a city the size of L.A. can reasonably produce. I’d love to be proved wrong, but barring a deep change in our permissive gun culture or a massive tax increase doubling the size of the LAPD, I’d bet against it.

If those numbers crept up consistently year after year, that would be cause for great concern. But at this point, if crime figures rise 10 percent, or drop by that much, from one year to the next, it’s worth understanding and addressing with calm and context — but not frothing over.

I say this after, again, years as a crime reporter, and fully aware that some areas of the city, and of the region, still have serious problems and that these need attention.

Nor am I saying murder is okay if it’s below a certain number. Just that there are stories we ought also to pay attention to.

The real story is not that crime or homicide rose 10 percent.

The real story is that, while we witness blooms of intercultural savagery around the world, in our region of races, languages, and religions from every corner of the globe, crime has become negligible – a minor part of life and not just for wealthy folks, but, importantly and especially, for working people.

Some notorious headlines notwithstanding – yes, Rodney King, we can all get along and, by and large, in Southern California, we are. In the end, the 2015 homicide figures, as painful as they are for some families, did reflect that.

(Hate crime, btw, is almost nonexistent, certainly compared to the volume and the sheer violence of those crimes in the early and mid-2000s, most of them committed by Latino street gangs against blacks, which you can read more about in a chapter essay that I wrote for this anthology.)

The real story is how many working-class neighborhoods, where murder once stunted life and commerce, are now mercifully at peace, and property values are reflecting that.

And, above all, the real story  is that gang violence has dropped so precipitously. (Remember: L.A. used to have way more than 280 gang-related homicides, in years when total homicides topped a thousand.) And so has gangs’ public behavior that did so much to blight those working-class neighborhoods that could least afford their crap. Gangs no longer have the run of the region.

This morning I was out on a street that was notorious for its gang in the 1990s. I found it quiet, pleasant, unscarred by graffiti. On the contrary, the houses seemed improved, freshly painted – one of many such neighborhoods all across Southern California.

Later, I was in Lincoln Park, talking with Braulio Garcia, a Mexican immigrant who has owned La Guadalupana Market (pictured above) since 1988. Up to about decade ago, he said, gangs were everywhere in Lincoln Park. A few blocks away is a gang mural, apparently from the 1990s, that lists the members of the neighborhood crew, and giving an RIP to a few friends who didn’t make it. Now, Mr. Garcia told me,  he doesn’t see gangs or their graffiti at all.

So on that note I’ll leave you, while daring to suggest that things are looking up, and hoping, meanwhile, that we have a Happy New Year, one and all.

This article was poriginally published in A Reporter’s Blog.