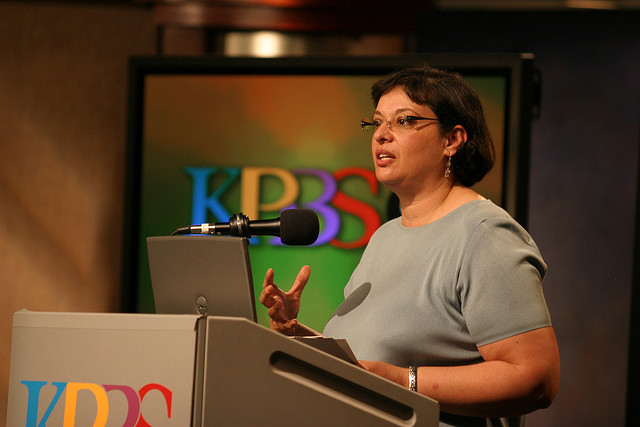 *A Latina, Sonia Nazario, was the youngest reporter to be hired by the Wall Street Journal. VL

Every day journalists work to seek the truth, tell the story and be a watchdog for society. Goals that take hard work, determination and perseverance to achieve. For Pulitzer Prize-winning reporter and author Sonia Nazario, these were traits she said she felt were instilled in her DNA.

“I’ve always thought of myself as a very determined person,” said Nazario, while speaking at a discussion of her book, Enrique’s Journey, at the Chicago Cultural Center on October 20, 2014.

Nazario, who was born in Wisconsin, said she grew up hating the thought of reading and writing. Instead, she chose to spend time on the back of a horse, barrel jumping and racing.

“I was 14, but I already understood the power of words, the power of storytelling,” she said. “I was going to be a journalist, too. I was going to be a truth-teller.”The daughter of a bio-chemist, Nazario said she thought her father viewed her as the dumb jock and her sister as the golden child. Unlike her sister, she often spent her time reading and studying. It wasn’t until a year after her mother moved them back to Venezuela following her father’s fatal heart attack when Nazario was inspired to become a journalist.

Nazario followed her boyfriend to Williams College in Massachusetts—a place she said she didn’t feel she fit in, but was determined to work hard and play catch up to be at the same level or better as her peers. After graduation, Nazario was the youngest writer to be hired by the Wall Street Journal. This would be the foundation to her self-described “fly on the wall reporting.”

“My goal is to grab you by the throat and take you on a ride,” Nazario said.

Eventually she moved to Los Angeles to work for the Los Angeles Times as a projects reporter. Little did she know this would be a turning point in her career.

Nazario reiterated a conversation she had with her house cleaner, Carmen. Nazario said she asked Carmen if she had more than one child. It was then Carmen started crying and said she had to leave her four children behind to come to the U.S. to attempt to make a living. Carmen said she wanted to eventually bring her children to the states and support them. She hadn’t seen her children in 12 years.

Nazario said she was so taken back by this story, she decided to look further into child immigration.

The reason, she said, is because mothers tell their children they will return for them in a year or two. From Nazario’s experience, she found it’s usually five to 10 years, or sometimes even more.

Instead of waiting in wonder, Nazario said children of all ages decide to make the trek to find their mothers.

One child, Enrique, who was only 12 years old when he started his journey from Honduras, became Nazario’s anecdote to showcase the bigger issue at hand.

“Have you ever been through something where you said, ‘This is so bad, I can’t take another bit of this?’” Nazario asked the audience at the Chicago Cultural Center.

She said that is what it’s like for some of these children. After violence, drug cartel threats, kidnappings and family issues, many leave to find not only their mothers, but also protection.

As for Enrique’s homeland of Honduras, it has had the highest homicide rate in the world for the last three years, and it also has the second highest body count behind Syria, Nazario said.

Nazario made Enrique’s journey from Honduras twice, and each took three months.

She described the risks and difficulty children face to run and jump on the freight trains, clinging to the ladders, rooftops and sidecars for their lives. She said not every child makes it. Some die in the process, cut up by the train wheels. Some get badly injured– losing limbs, fingers and toes. But those who do survive still have to face extreme temperatures, tree branches hitting them, police and gang members.

Despite all the bad experiences, Nazario said there were glimmers of hope and selflessness.

She said in Veracruz, people ran to the trains with bags of food, bottles of water or just knelt down and prayed for the children.

In McCallen, Texas, Nazario said there is a church working to help other women, children and families get donated clothes, food and even a shower to clean them selves.

While the journey is a dangerous and trying one for these immigrant children, Nazario said that is just the first bridge to cross. The bigger issue is getting proper representation in the courtroom for these children. Without a lawyer, children are deported nine times out of 10, according to Mary Meg McCarthy, executive director of the Heartland Alliance’s National Immigrant Justice Center.

Nazario and McCarthy said the children come here for protection and to find their mothers. After the turmoil they’ve been through to cross the border, it’s very hard for them to defend their reasoning and state their case.

McCarthy said every one can take help by being engaged, encouraging and taking action.

Although Nazario has brought the issue to the surface in her book, she said finding funding for these children is something she is still working towards. It is still a part of her career journey that has yet to be written.

Danielle Dwyer is a journalism graduate student at Columbia College in Chicago. She is interested in sports and broadcast journalism.