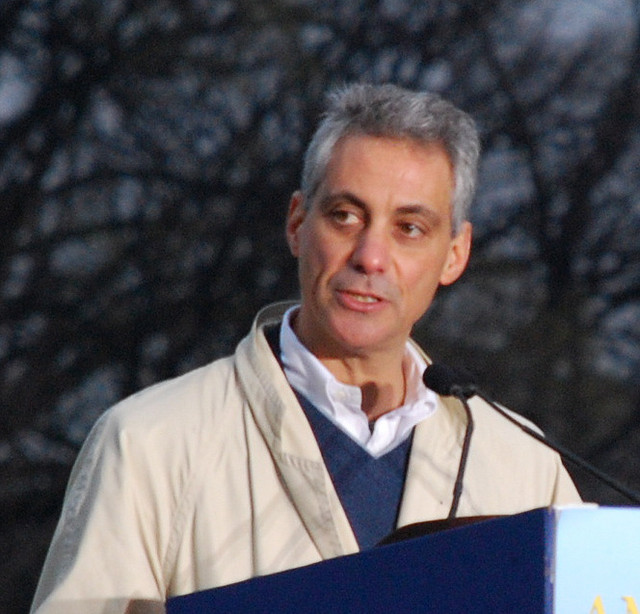 Today, Chicago Public Schools and Mayor Emanuel announced a new selective-enrollment high school on the near North side of Chicago.  The new school—which will only accept students based on high test scores—will be built on Chicago Park District property near Halsted and Division: prime city real estate.  The new school will likely be named after our president.

Despite the fact that we do have high-achieving students on the Southwest side—I taught them ten years ago in a 60629 school; I taught them when I worked at a top city school; I teach them now in another 60629 school—the CPS bureaucracy limits their options.  Many of my current students could definitely succeed at Jones, or Payton, or Northside, or Young.  However, getting in there and getting there is simply too complicated.  Today’s competition for those seats exceeds the time and resources available to most low-income Latino families.

Even in the 21st century, Southwest side, mostly Latino, students attend school in mostly outdated buildings:

Hancock is in an old Catholic high school building from 1936

Solorio built in 2010—in a ward run by Alderman Ed Burke, one of Chicago’smost powerful Chicagoans, and handed over to the Academy for Urban School Leadership, whose former chair is now president of Chicago’s Board of Education

Despite the high population growth on the Southwest side (because of relocation—not simply reproduction), Southwest side communities without political clout remain with outdated, overcrowded school options for their (our) children.

My own children are in 3rd grade and kindergarten.  I don’t know what we’d do if they were high-school age.  As much as I’d want them to attend Payton or Northside or the new high school, I wouldn’t want them on two trains and a bus or two for over an hour at the break of dawn or in the dark of night.

Jones College Prep just got a brand-new $115 million building.  Payton received a $17 million expansion.  The new selective-enrollment high school will use $60 million in TIF money and cost much, much more.  That’s a lot of money for affluent downtown and north side neighborhoods.

Because of today’s announcement, affluent, mostly white families have another good school option at their doorstep instead of the ‘burbs.  As theSun-Times reported, “The city’s top-rated schools counted among the state’s best — Walter Payton, Northside College Prep, Jones College Prep, Lane Tech — all sit north of Roosevelt.”  While white students make up about 9% of the Chicago Public Schools student population, they make up about 30% of the population at the city’s top schools (see Illinois Report Cards for top schools mentioned).

I hope the loud, mostly white, voices who criticize charter schools for “only accepting top students” will lift their voices and cell phones to tweet and post and protest this new school that truly–only–accepts top students based on test scores.  Then again, many of the loud voices criticizing charter schools and CPS will not enroll their own kids in just any neighborhood high school.

The drop of low-income students in one top CPS school plummeted as gentrification began to overtake Chicago.  Instead of creating a “brain drain” in our neighborhood schools, selective-enrollment high schools became a “pipe dream” for high-achieving low-income students as our city’s demographics shifted (see orange bars in graph).

Still, possibly, distantly, there’s hope for the Southwest side.  The Sun-Times reported that “in March, Alderman Marty Quinn of the 13th Ward [my ward] asked the Board of Education to consider putting a selective-enrollment high school somewhere on the Southwest Side.”  At the March Board meeting, Quinn said, “Our children are as deserving of the opportunities such as school reform as the children in other parts of the city who have them closer at hand.”

Another hope is that the new CPS Latino Advisory Committee will make this inequality a major part of their current conversations with CEO Barbara Byrd-Bennett.  We know the Latino aldermen probably won’t make it an issue with the mayor.

Remember to submit your vote for my Bammy! Award nomination in the blogger category–scroll down on your phone or look on the right if you’re on a computer.