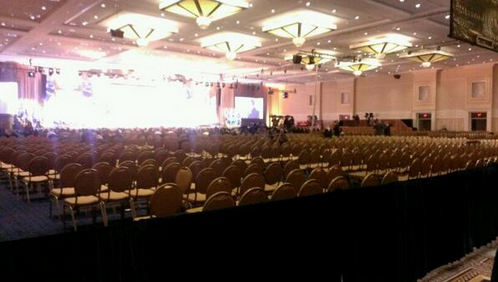 One picture, posted Thursday by John Hudak on Twitter, explains in a moment’s flash the Republican “Latino problem.” It has nothing to do with Latinos.

Hudak is the editor of the Brookings Institution’s FixGov blog. While reporting on this year’s CPAC (the nation’s largest conservative political confab) he attended a panel on GOP outreach into minority communities. Ten minutes into the session he noticed a largely empty room, and took the picture.

Several things need to be mentioned for context: first, the panelists were GOP notables – Ed Gillespie, and Republican strategists Jason Roe, Elroy Sailor, and Robert Woodson. While Sailor and Woodson are African-American, there wasn’t a Latino in the bunch. Second, there are reports that towards the end of the session the room filled with conference-goers. But that may be because the minority outreach session ran long, and into the next scheduled time slot headlined by the NRA’s Wayne LaPierre. Gun rights filled the room, Latinos not so much.

Keep in mind, CPAC is the mother ship conference of all things conservative. Every GOP presidential hopeful is asked to attend, to stake their claim in the party’s ideological land grab. In that highest of Republican circles you are noted as much for not being invited to attend. So it was in that context that minority outreach was discussed, and hardly anyone cared. That, in a moment’s snapshot, is the Republican “Latino problem.”

The Republican “Latino problem” has nothing to do with Latinos. In order to fix it, something fundamental has to change about how Republicans see themselves and see those not like them.