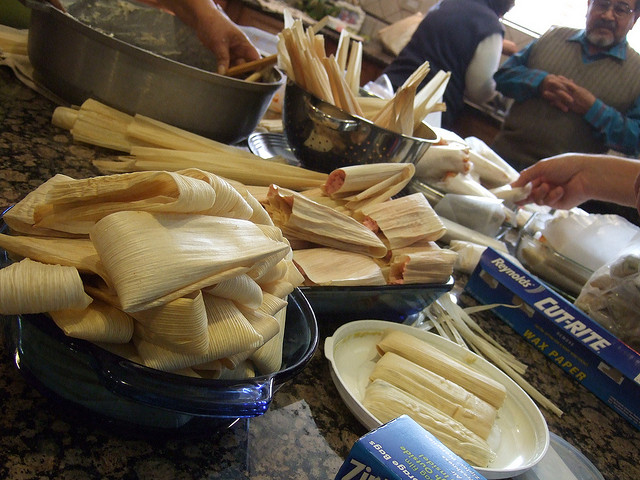 My mother was the greatest tamale maker in the world. That’s not just me bragging but the words of an Associated Press writer who once profiled her about her tamale-making expertise deep in the heart of Texas.

That story by reporter Jules Loh several decades ago made her a tamale celebrity of sorts among women – not only Latinas but Anglos and African Americans, as well – who called on her to sell them tamales or, better still, to allow them to join her tamaladas.

Tamaladas were the tamale-cooking feasts she would host at our home or at the kitchen of our parish church often throughout the year but which even today take on a special meaning during the holiday season for Mexicans and Mexican-Americans.

“Tamales,” noted the AP reporter to whom my mom would ship frozen tamales every Christmas, no matter where he was assigned, “may be ‘America’s oldest Christmas food.’”

My mother and her cadre of helpers would make thousands of tamales each Christmas season, and their dedicated work would especially intensify from Dec. 12, the Feast of Our Lady of Guadalupe through Three Kings’ Day on Jan. 6.

Nothing, though, beat the all-night tamaladas of Christmas Eve which would be spiced with my grandmother’s steaming-hot Mexican chocolate, bunuelos and then a break for MidnightMass, followed by the first tamales of Christmas morning.

“Even today, when we gather to make tamales, there are just so many memories of the past and reminiscing of old times,” says Debby Veracruz, a cousin who assumed much of the tamalada tradition from my mother.

“I never make tamales when I don’t think of my mom, or Aunt Connie or your mom and those wondering memories dating back to when I was a child learning the tradition.”

Even today, Veracruz says, tamaladas become a time when family members who rarely see each other come together, each happy just to spend sometime with the women they have known since childhood.

The tradition of tamale-making dates back to pre-Columbian times, though the Mayansdepicted tamales in a variety of forms in murals and on ceramics dating back over 2000 years.

Today tamale-making has become big business at locations that seem strange to call assembly-line, tamale-making factories since all it usually amounts to is restaurant-size kitchens filled with women making tamales by hand and cooking them in large steaming pots.

It seems simple enough. The dough, called masa, made of hominy flour is spread on dried corn husks that have been soaked in water to make them pliable.

Then a filling of pork, beef or chicken is laid in the middle. The meat has been boiled for hours until it’s fork tender enough to be shredded.

The tamale is then folded one side over the other with the thinner end on top.

Some cooks add spicy sauces and chiles, and in Los Angeles they even have vegetarian tamales with cheese, nuts or fruits.

And the tradition transcends tamales and tamale-making. It is, in a sense, like a topping on the holidays.

“It is about sustenance, but not just in the nutritional sense,” says Gustavo Arellano, author of the book Taco USA: How Mexican Food Conquered America. “It’s also in a community sense. It’s also in a spiritual sense.

This article was originally published in Voxxi.

Tony Castro is the author of the newly-released “The Prince of South Waco: American Dreams and Great Expectations,” as well as of the critically-acclaimed “Chicano Power: The Emergence of Mexican America” and the best-selling “Mickey Mantle: America’s Prodigal Son.”